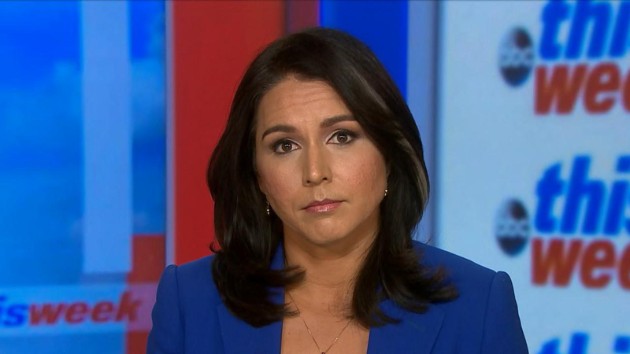 ABC News(WASHINGTON) — Hawaii Rep. Tulsi Gabbard filed a lawsuit against Hillary Clinton on Wednesday for defamation alleging that the former secretary of state suggested the congresswoman and 2020 Democratic presidential candidate was a “favorite of the Russians.”The lawsuit is in response to Clinton’s October 2019, interview with David Plouffe on “Campaign HQ,” a podcast run by the 2008 Obama campaign manager, in which Clinton without naming names — and just ahead of that month’s Democratic presidential candidate debate — said that a female 2020 candidate was a “favorite of the Russians” and was being “groomed’ by Republicans for a third-party run.The exchange with Plouffe came as a part of a much longer conversation centered on possible Republican paths to victory in 2020. Clinton suggested that President Donald Trump’s campaign would try to deflect votes from the eventual Democratic nominee toward that third-party candidate.At the time there were five Democratic women running for president: Gabbard, Massachusetts Sen. Elizabeth Warren, Minnesota Sen. Amy Klobuchar, California Sen. Kamala Harris and author Marianne Williamson. However, the comment appeared to be aimed at Gabbard.At the time, Clinton’s spokesman Nick Merrill told CNN in response to a question about whether she was referring to Gabbard simply said, “If the nesting doll fits.” However later that same night Merrill clarified Clinton’s comments on Twitter tweeting “Folks, listen to the podcast. She doesn’t say the Russians are grooming anyone. It was a question about Republicans.”

Folks, listen to the podcast. She doesn’t say the Russians are grooming anyone. It was a question about Republicans.Cc:@VanJones68 https://t.co/xU7WAob0Ve

On Wednesday in answer to an ABC News question about Clinton’s response to the lawsuit, Merrill said, “That’s ridiculous.”Gabbard on ABC’s The View in November said “It’s offensive to me as a soldier, as an American, as a member of Congress, as a veteran, and frankly as a woman, to be so demeaned in this way,” Gabbard, who is a major in the Hawaii National Guard told the hosts. “I am a patriot, I love our country … I have dedicated almost my entire adult life to protecting the safety, security and freedom of all Americans in this country.Also in November, Gabbard’s legal counsel released a statement calling on Clinton to hold a press conference to “verbally retract — in full — your comments. We also demand that you immediately publish this full and fair retraction on the twitter account @HillaryClinton.”Clinton never did.In the lawsuit, Gabbard said that her decision to step down as Democratic National Committee Vice Chairwoman in order to endorse Sen. Bernie Sanders in 2016 was perceived as a “slight” by Clinton. Shortly after her endorsement the lawsuit claims “Clinton’s agents emailed Tulsi to tell her that the Clinton team “no longer trust[s] [Tulsi’s] judgment,” and Tulsi was told that the Clinton team would never forget this.”Gabbard’s lawyers say that Clinton’s remarks caused her to suffer “ significant actual damages, personally and professionally, that are estimated to exceed $50 million — and continue to this day.”In a statement, Gabbard’s legal counsel Brian Dunne wrote, “one would expect someone of Mrs. Clinton’s political background to act with a greater level of maturity and dignity, but her personal hostility toward Rep. Gabbard apparently clouded Mrs. Clinton’s reason and blinded her to U.S. defamation laws. She resorted to a damaging whisper campaign founded on lies, and when presented with the opportunity to retract her damaging remarks, she refused. Rep. Gabbard must defend her good name and hold Mrs. Clinton responsible. This lawsuit intends to do just that.” Copyright © 2020, ABC Audio. All rights reserved.