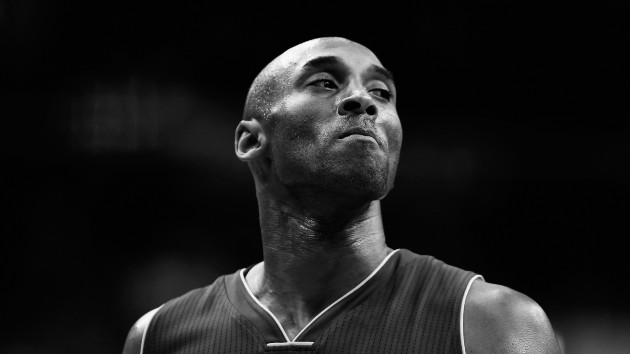 Rob Carr/Getty Images(NEW YORK) — Celebrity sports fans from around the world are paying homage to NBA legend Kobe Bryant after he died in a helicopter crash in California on Sunday.Fellow former NBA stars Dwyane Wade, Paul Pierce and Scottie Pippen were among the high-profile players who reacted to news of the beloved basketball player’s death.Bryant was one of nine people on a private helicopter that went down in Calabasas, California, on Sunday, killing everyone on board. He was 41 years old.Bryant’s 13-year-old daughter, Gianna, was also killed in the crash, according to the NBA. The other victims in the crash have not been officially identified.”Please no. Please god no. It can’t be true,” Cleveland Cavaliers player Kevin Love tweeted.NBA legend Michael Jordan released a statement saying, “I am in shock over the tragic news of Kobe’s and Gianna’s passing. Words can’t describe the pain I’m feeling. I loved Kobe — he was like a little brother to me. We used to talk often, and I will miss those conversations very much. He was a fierce competitor, one of the greats of the game and a creative force.””Kobe was also an amazing dad who loved his family deeply — and took great pride in his daughter’s love for the game of basketball,” Jordan continued. “Yvette joins me in sending my deepest condolences to Vanessa, the Lakers organization and basketball fans around the world.””I’m stunned. Words can’t even come close to describing it. Just an incredibly sad and tragic day,” Pippen, an NBA Hall of Famer, tweeted.”It’s a shocker to everyone, unbelievably said, and one of the more tragic days that — well, for me the reality is just setting in,” golfer Tiger Woods said in an interview after finishing his final round at the Farmers Insurance Open. He said he was told of Bryant’s death just after leaving the 18th green and was unaware why people were shouting “Do it for Mamba” during his round.Hall of Famer and 11-time NBA champion Bill Russell tweeted an image of himself and Bryant along with a caption that said he was praying for his wife and children.”Jeannine & I are absolutely shocked to hear of the loss of one of my favorite people & one of the best basketball minds in the history of the game! Our hearts & prayers to Vanessa & his girls. @kobebryant,” Russell said. “You were my biggest fan, but I was yours #RIPMAMBA “Twitter temporarily wasn’t working at around 3 p.m. ET as news of the player’s death flooded the platform. The term “Kobe” quickly became the No. 1 trending topic on Twitter, followed by “Mamba” and “BlackMamba.””Can’t be true. Just can’t be. Truly truly horrific. Rest In Peace Kobe,” NFL player JJ Watt tweeted.

Similarly, Wade said, “Nooooooooooo God please No!” In another post, Wade added: “RIP Kobe + GiGi ❤️? I know you said keep going but today we can’t. We love you and we’re gonna miss you brother.”The world of hip-hop also mourned the NBA champion’s death, with Drake posting a mural of Bryant on Instagram and R&B singer John Legend reminding fans to hold their loved ones close.”I’m so sad and stunned right now. In Staples Arena, where Kobe created so many memories for all of us, preparing to pay tribute to another brilliant man we lost too soon, Nipsey Hussle,” Legend, who was preparing for the Grammy Awards, tweeted. “Life can be so brutal and senseless sometimes. Hold on to your loved ones. We miss you, Kobe.”The mayor of Los Angeles, where Bryant spent his entire 20-year career with the Lakers, also mourned the player’s death.”This is a moment that leaves us struggling to find words that express the magnitude of shock and sorrow we are all feeling right now, and I am keeping Kobe’s entire family in my prayers at this time of unimaginable grief,” Mayor Eric Garcetti said in a statement.Here’s a look at how other celebrity fans are mourning the basketball star’s death:NBA Hall of Famer Magic Johnson“Kobe and I shared so many special conversations about life and basketball. We had so much in common off the court. I used to love talking to him about Lakers basketball, being fathers and husbands and how much we loved Italy. I will miss those conversations and him so much.”Former President Barack Obama“Kobe was a legend on the court and just getting started in what would have been just as meaningful a second act. To lose Gianna is even more heartbreaking to us as parents. Michelle and I send love and prayers to Vanessa and the entire Bryant family on an unthinkable day.”Retired NBA star Kareem Abdul-Jabbar“Most people will remember Kobe as the magnificent athlete who inspired a whole generation of basketball players. But I will always remember him as a man who was much more than an athlete.”New England Patriots quarterback Tom Brady“We miss you already Kobe.”R&B superstar Mariah Carey“In shock right now. RIP Kobe.”Rapper Wyclef Jean“A true gladiator in our life time. You will be forever embedded in our memories, our childrens memories, and generations to come. @kobebryant”Singer Demi Lovato“This makes me so sad. Kobe you were always so sweet to me. Known you over 10 years.. not super well but we always joked about you coming over and playing that game of horse! You will he so missed by so many. You’re a legend with wings now. RIP Kobe ???”Actress Reese Witherspoon“Just devastated to hear about #KobeBryant .?An extraordinary athlete, and a genuinely kind, wonderful man. Sending love, prayers & compassion to his family. To his entire @NBA family as well.”Singer Justin Bieber“It can’t be. You always encouraged me mamba. Gave me me some of the best quotes that we smile about to this day.! Love you man!”Former Lakers teammate Pau Gasol“Beyond devastated… my big brother… I can’t, I just can’t believe it.”Actor Vin Diesel“Heavy heart today… to the family, please know how much he impacted all of our lives and will live on in our hearts. Sending the deepest of condolences to all involved. Our prayers… for the family of this true hero.”Comedian Kevin Hart“This honestly doesn’t make sense….I just saw you man. This hurts my heart. God please place your hands on his family and help guide them thru this unbearable time. We love you forever man…Legends never die!!!! #MambaMentality #RIP…. RIP to the other passengers as well as sending prayers to their families.”Former LA Lakers teammate Shaquille O’Neal“There’s no words to express the pain Im going through with this tragedy of loosing my neice Gigi & my brother @kobebryant I love u and u will be missed. My condolences goes out to the Bryant family and the families of the other passengers on board. IM SICK RIGHT NOW.”Copyright © 2020, ABC Audio. All rights reserved.