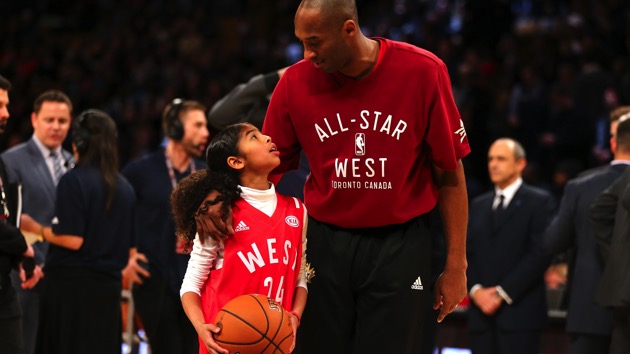 Elsa/Getty Images(LOS ANGELES) — “Mamba mentality” is more than a mantra uttered by ambitious athletes — it was the driving force behind Kobe Bryant and his efforts to inspire and foster player development, particularly within women’s basketball.The basketball legend tragically died along with eight others, including his 13-year-old daughter, Gianna, in a helicopter crash in Calabasas, Calif., on Sunday while en route to a youth basketball tournament at his Thousand Oaks, Calif., training facility, Mamba Sports Academy.Sunday was part of the first weekend of 2020 games in the inaugural Mamba Cup tournament, and the event was canceled in the wake of the news.Kobe Bryant’s involvement in youth and pre-professional basketballAfter his storied 20-year NBA career with the Los Angeles Lakers ended with his 2016 retirement, the five-time NBA champion began to coach Gianna’s middle school basketball team.”We’ve been working together for a year and a half and they’ve improved tremendously in that time,” Bryant said in an interview with “Entertainment Tonight” in 2018. “I’ve got a group of great parents, a group of really, really intelligent, hardworking girls, and — they’re all seventh graders, they’re all 12 years old — but they’ve been playing so well.”The two-time Olympic gold medalist continued to grow the game he cherished for generations to come through youth programs in Southern California.In 2018, he announced a partnership with a multi-sport training facility in Thousand Oaks, Calif., and re-branded it as the Mamba Sports Academy. The academy opened in 2019.

“MAMBA Sports Academy is a natural expansion of my commitment to educating and empowering the next generation of kids through sports,” the 18-time All-Star said in a press release.The inaugural basketball tournament series, known as the Mamba Cup, kicked off in September 2019 and was slated to include a series of 11 tournaments culminating with championships at the end of March.

Check out these dedicated #MambaLeague players and winners of the #Wizenard book report challenge from @bgclaharbor! Your futures are as big as you can dream. It just takes consistency, determination, and perseverance. I look forward to watching what you can do! #MambaMentality pic.twitter.com/WCXcR7JpYl

Bryant’s support for women’s basketball extended to the college level. As an example of his individual dedication, he became a close friend to University of Oregon star Sabrina Ionescu, going to her games — along with Gianna — and even dedicating an episode of his ESPN+ show to analyzing her game, according to ESPN.Following the news of his death, Ionescu dedicated her Sunday night game against rival Oregon State to him.

Sabrina Ionescu mourns her friend Kobe Bryant ahead of her game against Oregon State. pic.twitter.com/urdYuFSNW5

“I mean everything I do, I do it for him obviously, really close friend and uh this season’s for him,” she told ESPN, visibly emotional after her team’s 66-57 win.Outspoken support for the WNBABryant was known as an outspoken supporter of the WNBA and voiced his support for its athletes as recently as last week.ESPN reported that Bryant told CNN he could see a day where women could play in the same league that he spent 20 years in.”There’s a lot of players with a lot of skill that could do it,” he told CNN last Wednesday. “Diana Taurasi, Maya Moore, Elena Delle Donne. There’s a lot of great players out there, so they could certainly keep up with them.”Bryant was also actively involved with the WNBA through his close friend and former teammate Derek Fisher, who is now the head coach for the Los Angeles Sparks.”I want us to continue to push for what he was most recently striving for in terms of equity and opportunity for young girls, for girls like his daughters that are still with us,” Fisher told Good Morning America on Monday.”For girls like my daughters, for women to-come. He didn’t just talk about those things. He lived it. Very similar to what he did on the court, he didn’t talk about being great. He worked at it everyday,” Fisher said.One of Fisher’s star players and ESPN NBA analyst Chiney Ogwumike reflected on Bryant’s legacy after the tragic news and explained how much he meant to women’s basketball.”Me personally being a part of the women’s basketball community this is just extremely personal for us as well,” she told ESPN. “I know we talk a lot about his NBA credentials, but he was very much present at WNBA games, saw him at WNBA All-Stars.”She said Bryant had “a tremendous relationship” with the Sparks, adding that Fisher “always tells us stories about how to be a champion each and every day based on having to go up against Kobe in practice.”Ogwumike also recalled being at the U.S. Women’s National Team training competition when “Kobe called us into a private room with his daughters.””He spent the entire half-time and then some, about 30 minutes, talking to us about how to understand Coach Fisher and how to compete at the highest level and it really helped us as players. He was always giving back,” she added.However, Bryant’s high-profile involvement in women’s and girls’ athletics was not without criticism due to his past. The basketball star was accused of sexual assault by a hotel employee in Colorado, where he received treatment for a knee injury, in 2003.Bryant denied the allegation and charges were ultimately dropped in 2004. He publicly apologized to his accuser at that time.

Tributes for Kobe Bryant pour in from female athletesThe Women’s National Basketball Association, its teams and current and former WNBA players shared their love for Bryant and support for his family on social media as news of his death spread.

Kobe and Gianna meant a lot to our program. Our thoughts are with the Bryant family. Mamba Mentality will live on forever, but they are deeply missed. ? pic.twitter.com/4Ib96yFxgg

We have lost more than a basketball player today. We lost a legend, my friend and my brother! We have also lost a part of our future with GG gone too soon???????Prayers for all the family ????

Truly devastating. ?My heart goes out to all these families and their loved ones. Life is fragile. We all must remind ourselves of this. Hug your loved ones tight and never take a day for granted. ?? pic.twitter.com/OZakTZGfWY

I’ll never forget what #Kobe shared with us on @GMA…when I asked him if he missed basketball he said something that really stayed with me…that there’s a difference between what you do and who you are ?? We honor his life and legacy in our special tribute next @ABC and @ESPN pic.twitter.com/RBITKer35J

Never a good way to say "goodbye" ? Rest in peace Kobe and Gigi ❤ Prayers up for all of the families that lost loved ones.????. . . https://t.co/wjopNDTJXM pic.twitter.com/uxgI9SKaMT

I waited to post anything because like so many I refused to believe it! My heart aches for Vanessa and her girls and all of the families. Life is too short! Kobe, thank you for being you! Gigi will live on through the W as will you!#GoneTooSoon #MambaOut pic.twitter.com/5Woxdxtw2M