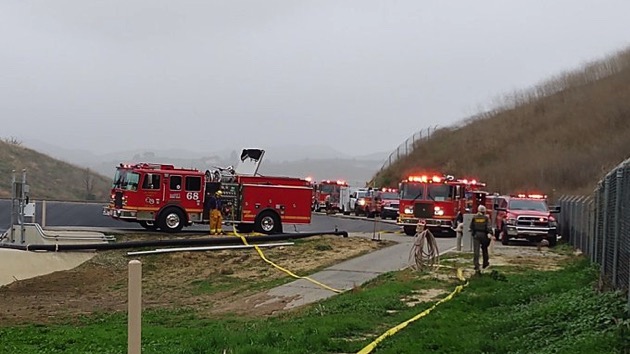 In this handout photo provided by the Los Angeles Sheriff’s Department, emergency crews respond to a helicopter crash that reportedly killed former NBA player Kobe Bryant, his 13-year-old daughter Gianna, and others on Jan. 26, 2020 in Calabasas, Calif. (Photo by LASD via Getty Images)(LOS ANGELES) — NBA great Kobe Bryant and his 13-year-old daughter Gianna were just two of the nine people who lost their lives in a helicopter crash in Southern California Sunday.The flight, which left from Orange County, Calif., was headed north when it crashed around 10 a.m. local time in Calabasas.Bryant was on his way to a game at his Mamba Sports Academy in Thousand Oaks along with others connected to the basketball program.As the world grieves the Los Angeles Lakers legend, here’s what we know so far about the others killed. John AltobelliCollege baseball coach John Altobelli — whose daughter was a basketball teammate of Gianna Bryant — was on the helicopter at the time of the accident.Altobelli worked at Orange Coast College for 27 years and was known to be a mentor to players, according to the school.”He truly personified what it means to be a baseball coach,” the school’s athletic director, Jason Kehler, said in a statement on Sunday. “The passion that he put into the game, but more importantly his athletes, was second to none — he treated them like family.””Our deepest condolences go out to the Altobelli family during this time of tragedy,” Kehler said.”We have lost a member of our OCC family, and our hearts are broken,” the college president, Angelica Suarez, added in a statement. “Coach Altobelli was a giant on our campus – a beloved teacher, coach, colleague and friend. This is a tremendous loss for our campus community.””John Altobelli was a great coach and man,” tweeted Barry Faulkner, a sportswriter at the Daily Pilot in Southern California. “I worked closely with him for more than a dozen years covering his OCC program. Huge heart. Great sense of humor and passion for the game, his players and his family. RIP Alto. Truly a legend.”

John Altobelli was a great coach and man. I worked closely with him for more than a dozen years covering his OCC program. Huge heart. Great sense of humor and passion for the game, his players and his family. RIP Alto. Truly a legend. pic.twitter.com/992kADK8qV

John was our head coach in 2012-14, and his son JJ played for us too. JJ and his other daughter Alexis survive them. Our heartfelt condolences to his family.

Christina MauserChristina Mauser was a mother, wife and a girls’ basketball coach.As a top assistant coach of the Mamba girls’ basketball team, she coached Gianna Bryant and Alyssa Altobelli, another coach told The Los Angeles Times.Mauser also was an assistant coach for the eighth grade girls basketball team at the Harbor Day School in Orange County.Mauser’s husband, Matt Mauser, wrote on Facebook, “My kids and I are devastated.””We lost our beautiful wife and mom today in a helicopter crash. Please respect our privacy,” he wrote Sunday. “Thank you for all the well wishes they mean so much.” Payton ChesterPayton Chester, an eighth grader at St. Margaret’s Episcopal School in San Juan Capistrano, California, was killed on the flight.”We are a community in mourning,” William Moseley, the head of the school, said in a letter to students and families. “This is an unimaginable loss for the Chester family and the entire St. Margaret’s community.”Sarah ChesterPayton Chester’s mother, Sarah Chester, was with her on that flight.Sarah Chester was on the board of trustees at her daughter’s school.She is survived by her husband and two sons.Todd Schmidt, Payton Chester’s former elementary school principal, said Sarah and Payton Chester “were genuine, kind-hearted, and caring…to the staff, to other families…and yes, especially to me.””While the world mourns the loss of a dynamic athlete and humanitarian, I mourn the loss of two people just as important,” Schmidt wrote on Facebook. “Their impact was just as meaningful, their loss will be just as keenly felt, and our hearts are just as broken.”ABC News has not yet confirmed the identity of the ninth victim.Copyright © 2020, ABC Audio. All rights reserved.