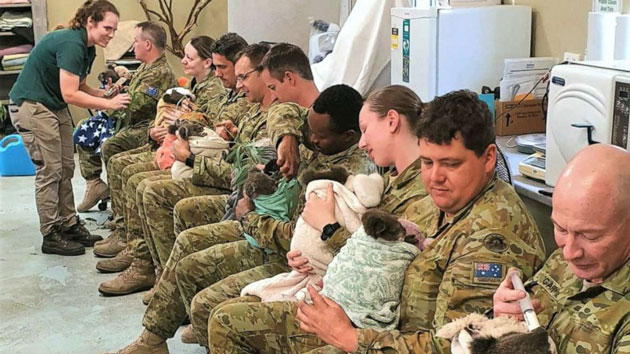 9th Brigade Australian Army via Facebook(CRAFERS, Australia) — Soldiers with the Australian army came to the rescue of several hungry koalas saved from the bushfires ravaging the country.Several servicemen and women were seen cuddling the koalas — swaddled in blankets — during feeding time at the Cleland Wildlife Park in Crafers, South Australia, in a photo posted to Instagram by the army on Tuesday.The soldiers appeared attentive and content as they tended to their new furry friends.The army also helped to build climbing mounts inside the park, according to the army.Tens of thousands of koalas have perished since the bushfires began in September. More than half of the population may have died, Sam Mitchell, co-owner of the Kangaroo Island Wildlife Park, told The Guardian earlier this month.The slow-moving koalas are often unable to escape the flames fast enough as they burn from treetop to treetop.Australians are doubtful that the country’s wildlife will be able to fully recover as the fire season continues for several months. As many as a billion animals are feared dead, experts have estimated.Copyright © 2020, ABC Audio. All rights reserved.