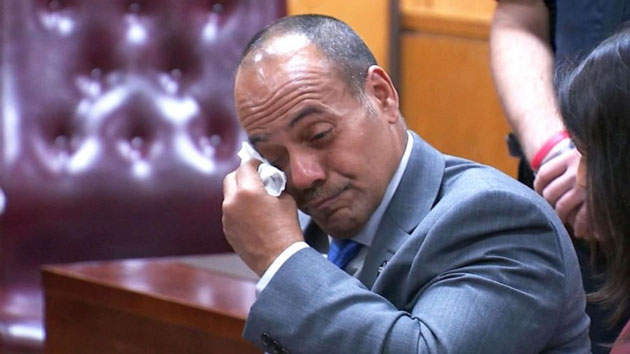 WABC(NEW YORK) — After spending a full 25-year sentence in prison for a crime he did not commit, a Bronx, New York, man was exonerated by the first prosecutorial conviction review unit on the East Coast.Rafael Ruiz was convicted in 1985 for sexually assaulting a girl in East Harlem. Ruiz, then 25, was sentenced to 8 1/3 to 25 years in prison and was released on parole in 2009 after serving the entire stint.Now, at the age of 60, Ruiz had his felony conviction wiped off his criminal record after newly tested DNA from the victim’s sex assault kit found by the Innocence Project and the Manhattan District Attorney Office’s Conviction Integrity Program excluded him from the case.”We were pleased to be joined in today’s motion by the Innocence Project and I’m grateful for their continued partnership,” said Manhattan District Attorney Cy Vance in a statement on Tuesday.Ruiz’s conviction was based on the description of a man named “Ronnie” who fit the victim’s description of her attacker.”I was thinking about my freedom the entire time I was sitting there,” Ruiz told New York ABC station WABC after the judge tossed the conviction.”The complainant’s current account of her 1984 assault differed significantly from her initial statements to investigators, the medical evidence, and her testimony at trial,” according to the motion prosecutors filed agreeing to vacate Ruiz’s conviction on Tuesday. “She said that the detective was pushing her to identify the guy and told her that this guy is hurting women.”According to the Innocence Project, the real alleged assailant lived across the hall from Ruiz’s brother and had a history of violence against women.Since 1958, over 2,548 wrongful convictions have been overturned in the United States, according to The National Registry of Exonerations. Of the thousands of exoneration cases, 735 were overturned because of mistaken witness identification, according to data from the NRE.Ruiz was offered plea bargains in exchange to going to trial, but refused. At his trial, Ruiz testified on his own behalf and proclaimed his innocence, according to the motion.Ruiz’s case highlighted what is often called the “trial penalty” — when defendants receive much longer sentences for the same crime after taking their case to trial than they would have if they had pleaded guilty and agreed to a deal, according to the Innocence Project.”A prosecutor’s job is not to seek convictions, but to seek justice,” said Vance.The Manhattan District Attorney’s Conviction Integrity Program was created in 2010 and was the first of its kind on the East Coast to “review claims of innocence, and just as importantly, to improve prosecutorial practices on the front end and prevent wrongful convictions from happening in the first place,” Vance said in a statement.To date, the CIP has overturned 10 convictions while 30 other cases were exonerated by a judge, according to the NRE.”I’m going to try and find a wife, get married and have kids,” said Ruiz, which made his family and supporters, including fellow exoneree Dewey Bozella, who was in attendance, giggle. Copyright © 2020, ABC Audio. All rights reserved.