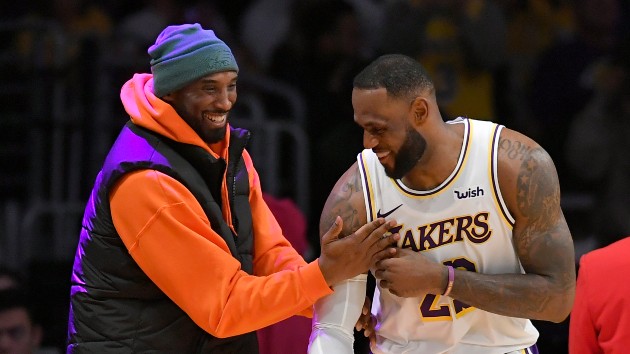 John McCoy/Getty Images(LOS ANGELES) — Los Angeles Lakers star LeBron James shared a heartfelt tribute to his “brother” and former Olympic teammate Kobe Bryant on Monday, promising to carry on the NBA superstar’s legacy in the wake of his untimely death.In his first comments on the tragedy, James said he had just spoken to Bryant on Sunday — after passing the basketball legend on the all-time scoring list in Philadelphia Saturday night.”I’m Not Ready but here I go. Man I sitting here trying to write something for this post but every time I try I begin crying again just thinking about you, niece Gigi and the friendship/bond/brotherhood we had,” James wrote on Instagram. “I literally just heard your voice Sunday morning before I left Philly to head back to LA. Didn’t think for one bit in a million years that would be the last conversation we’d have.”Bryant was one of nine people on a private helicopter that went down in Calabasas, California, on Sunday, killing everyone on board. He was 41 years old. Bryant’s 13-year-old daughter, Gianna, was also killed in the crash.James, who passed Bryant for third place on the NBA’s all-time scoring on Saturday, said he was “heartbroken and devastated” but vowed to carry on the superstar’s legacy.”Man I love you big bro. My heart goes to Vanessa and the kids. I promise you I’ll continue your legacy man! You mean so much to us all here especially #LakerNation,” he wrote. “Please give me the strength from the heavens above and watch over me! I got US here! There’s so much more I want to say but just can’t right now because I can’t get through it! Until we meet again my brother!!”James shared the post to his nearly 60 million Instagram followers late Monday night. It acquired about four million likes in less than an hour.Bryant was not a frequent Instagram poster, but his last post before his death featured an image of he and LeBron smiling and embracing each other on the court.”On to #2 @kingjames! Keep growing the game and charting the path for the next,” Bryant wrote in the caption Saturday, referring to his successor as the leader of the Lakers.Copyright © 2020, ABC Audio. All rights reserved.