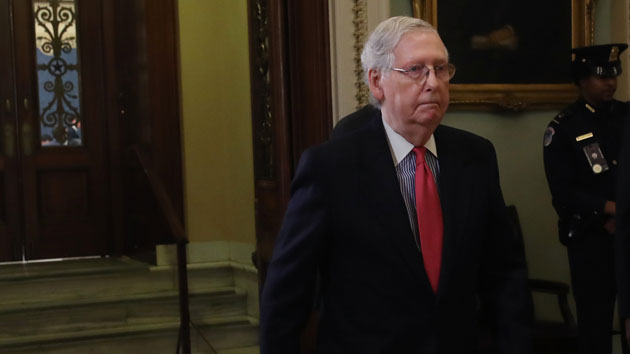 Mark Wilson/Getty Images(WASHINGTON) — If GOP wants ‘complete truth,’ they should want to hear from witnesses: Rep. DemingsHouse impeachment manager Rep. Val Demings is interviewed on “This Week.”Erik S Lesser/EPA via ShutterstockSenate Majority Leader Mitch McConnell told Republican senators Tuesday evening that he doesn’t currently have the votes to block witnesses at President Donald Trump’s Senate impeachment trial.The Senate was set to vote as early as Friday on whether to consider having witnesses.McConnell and the GOP senators met behind closed doors shortly after Trump’s legal team ended their opening arguments, in which they tried to discredit reported new allegations from Trump’s former national security adviser, John Bolton.The New York Times reported that in a new book, Bolton claims that Trump told him he would keep withholding U.S. military aid to Ukraine until Ukraine agreed to help investigate former Vice President Joe Biden and his son Hunter.The president’s lawyer, Jay Sekulow, argued on Tuesday, “You cannot impeach a president based on an unsourced allegation.”He called the Bolton book manuscript “inadmissible.”The development landed like a bombshell amid Trump’s trial, with Democrats insisting that Bolton now must be called as a witness and even some key moderate Republicans, including Sens. Mitt Romney of Utah and Susan Collins of Maine, expressed support for the idea, but have not yet sided firmly with the Democrats.Even before the trial began, Democrats have been targeting four Republican senators — Romney, Collins and Sens. Lisa Murkowski of Alaska and Lamar Alexander of Tennessee — because that’s how many are needed to join Democrats in calling for witnesses.A senior White House official told ABC News that the president’s defense team still believes they will be able to defeat the measure to call witnesses.”We are exactly where we were going into the weekend,” the official said. “There are four senators in play, two of have spoken publicly about where they stand (Romney, Collins) and two who have not (Murkowski, Alexander).””It’s still a hard vote, but we are working hard. It’s a long time until Friday,” the official added.Still, the Senate’s number two Republican, John Thune, who is responsible for whipping the vote, acknowledged Tuesday to ABC News that there is genuine fear that the trial could turn into a chaotic mess.”Nobody wants a wide-open, sort-of free-for-all where this thing gets bogged down for weeks on end,” Thune said.He said he thought the GOP conference was unified behind a plan that would see more witnesses called than the Trump team would want, in exchange for a witness like Bolton.But Thune said it was proving difficult to figure out how to manage what could become an unwieldy process.”My assumption is that the president’s counsel is going to have a fairly long list that they’ll want to call, if the Dems get to have the witnesses they want to call. So, I just think it’s fraught with a lot of peril and could be a long, drawn-out process,” said Thune. Copyright © 2020, ABC Audio. All rights reserved.