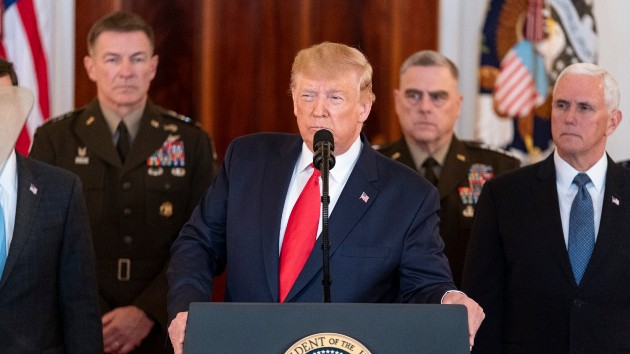 Official White House Photo by Shealah Craighead(NEW YORK) — More than half of Americans approve of President Donald Trump ordering the drone strike that killed Iran’s most powerful military commander earlier this month — even as nearly half think his actions have increased the risks of war and terrorism alike, according to an ABC News/Washington Post poll.The results show some conflicted responses to Trump’s actions. Fifty-three percent approve of the Jan. 3 drone strike against Iranian Gen. Qassem Soleimani. But fewer, 45%, approve of the way Trump is handling the situation with Iran overall.See a PDF with the full results from the poll here.Forty-eight percent, moreover, say Trump’s actions toward Iran have increased the risk of terrorism against Americans, while just 14% say he’s decreased this risk. Similarly, 46% think he’s increased the chance of war, vs. 16% who think he’s decreased it. In further evidence of division, 47% say Trump has handled the situation with Iran “about right,” while 42% say he’s been too aggressive (and 5%, too cautious).Another result shows a more negative than positive potential impact: Americans are 15 percentage points more apt to say his handling of the situation with Iran has made them more likely to oppose Trump for reelection than support him, 36% vs. 21%. Four in 10 in this poll, produced for ABC by Langer Research Associates, say it isn’t a factor in their vote.Copyright © 2020, ABC Audio. All rights reserved.