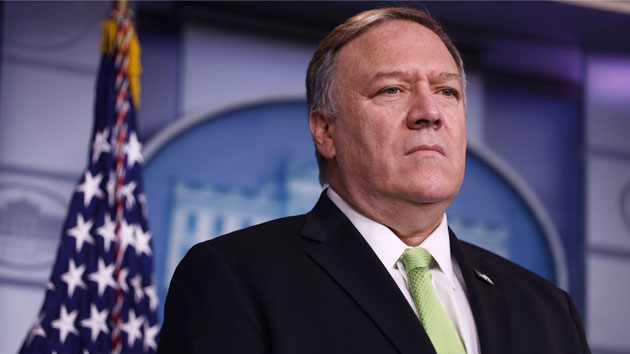 Alex Wong/Getty Images(WASHINGTON) — President Donald Trump on Tuesday commended Secretary of State Mike Pompeo, who was accused by an NPR reporter last week of shouting expletives at her following an interview, saying he “did a good job on her.”Trump made the comment during an East Room event announcing his Middle East peace plan, after recognizing Pompeo for his contributions to the agreement.”Wow, that’s impressive,” the president said of the standing ovation for the top U.S. diplomat. “That was very impressive Mike.”Trump added, “That reporter couldn’t have done too good a job on you … I think you did a good job on her, actually.”He went on to joke about speculation around Pompeo running for an open seat in the Senate representing Kansas, telling him to stay put.”That is good, thank you, Mike,” he said. “Are you running for Senate? I guess the answer is ‘no’ after that. They all want him to. Kansas, great state, they want him to. You’re doing a great job, don’t move.”On Saturday, Pompeo released a blistering statement that accused NPR’s Mary Louise Kelly of lying, but did not dispute her account of his expletive-laden tirade against her in his office after she interviewed him.He said the incident was “another example of how unhinged the media has become in its quest to hurt” Trump and his administration.Pompeo removed another NPR reporter on Monday from an upcoming trip to Europe and Central Asia, just days after Pompeo berated Kelly — who was born in Germany and has a masters in European Studies from Cambridge University in the U.K. — in his office and demanded she find Ukraine on a map.Removing NPR’s Michele Kelemen from the trip was seen as further retaliation by the State Department Correspondents’ Association, according to its president Shaun Tandon of Agence France-Presse. Copyright © 2020, ABC Audio. All rights reserved.