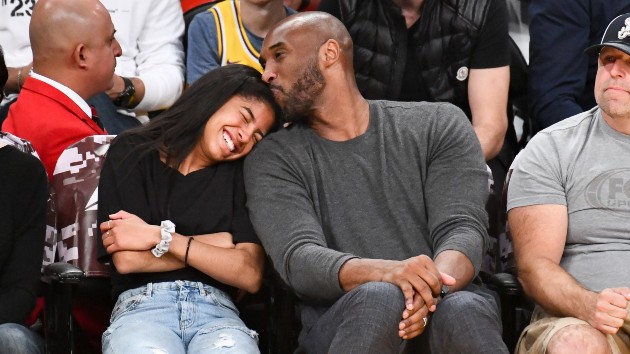 Allen Berezovsky/Getty Images(NEW YORK) — Kobe Bryant may forever be remembered as a basketball legend, but to his daughters and others that knew him, he was also a “girl dad.”As many around the world continue to mourn the loss of the basketball star and his 13-year-old daughter, Gianna, the term, “girl dad” became the No. 1 trending topic on Twitter and nearly 94,000 posts tagged by the same name were shared on Instagram.The trend began when ESPN’s Elle Duncan shared a memory of Bryant while she anchored SportsCenter on Monday night.In her story, she recalled the first time that she met the basketball star while backstage at an event for ESPN in New York. And while most encounters with celebrities or athletes are brief, Duncan and Bryant bonded over one thing: being a parent to daughters.At the time of her encounter, Duncan was 8 months pregnant, and her belly was the first thing Bryant noticed. Duncan said Bryant immediately asked how she was doing and asked what gender her baby was going to be.When Duncan told him that she was expecting a girl, Bryant, who had three daughters at the time, high-fived her and said, “Girls are the best.”He also offered her advice, “Just be grateful that you’ve been given that gift because girls are amazing.”Duncan fought back tears when she described Bryant’s love of being a father to girls of his own and the personalities of each of them.”I would have five more girls if I could. I’m a girl dad,” he told her.

"I would have 5 more girls if I could. I'm a girl dad."@elleduncanESPN's story about how much Kobe loved his daughters is something special. pic.twitter.com/1KJx17QRjY

Bryant and his wife Vanessa had four daughters: Natalia, 17, Gianna, 13, Bianka, 3, and Capri, 7 months old.The news of Bryant’s death struck a chord with many. The 41-year-old was killed in a tragic helicopter crash along with nine others on Sunday morning.When Duncan’s story was shared on the SportsCenter Twitter page, it was retweeted nearly 30,000 times and many hashtagged the term “girl dad” in their own posts sharing images of their daughters or their fathers.On Twitter, Chrissy Teigen, who is the mother of a 3-year-old daughter, shared Duncan’s heartfelt tribute and said, “The last time I remember John crying, aside from this week, was when Luna wrapped her little finger around his at the hospital when she was born. There really is something magical about girls and their dads. Thank you, @elleduncanESPN.”Celebrities and athletes from Alex Rodriguez to Timbaland chimed in, too.On Instagram, nearly 96,000 posts were dedicated to the hashtag.”My dad was a man built for sons but ended up with daughters,” actress and mother Gabrielle Union-Wade, the wife of Bryant’s NBA contemporary Dwyane Wade, shared in an Instagram post. “Thank you to everyone who was just being involved parents and adults who loved kids.”At the end of her story, Duncan said that when she reflects on the moment she met the basketball star and his death, she’s comforted by the idea that Bryant died doing what he loved the most.”When I reflect on this tragedy and the half an hour that I spent with Kobe Bryant two years ago I suppose the only small source of comfort for me is knowing he died doing what he loved the most,” she said. “Being a dad. Being a ‘girl dad."” Copyright © 2020, ABC Audio. All rights reserved.