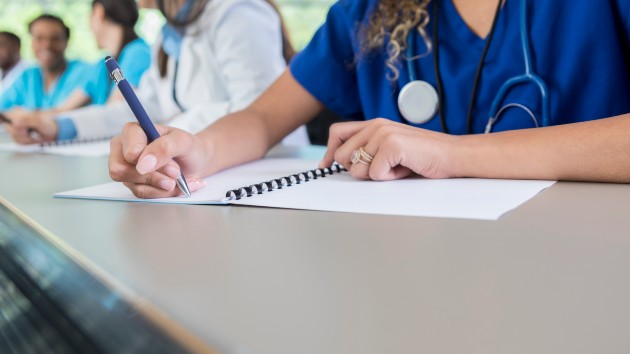 SDI Productions/iStock(NEW YORK) — Human trafficking is a serious public health issue that negatively affects the well-being of individuals, families and communities. It is considered modern day slavery and may involve force, fraud or coercion in exchange for labor or commercial sex acts.

With over 40 million victims worldwide, and hundreds of thousands estimated in the U.S., it is considered a billion dollar global industry, according to the International Labor Organization. Domestically, a reported 50,000 people are trafficked into the U.S. yearly.Health care professionals encounter victims of human trafficking, but little in the form of education is provided during training programs in the United States, according to a recent study by the American Journal of Prevention.”In our review, we only found a few publications looking at best practices to integrate human trafficking information into the curriculum,” said Dr. Juliana Kling, senior author and a physician of internal medicine within the division of women’s health at the Mayo Clinic. “We were really focused on the sex trafficking, specifically on identification and intervention for victims of sex trafficking.”When asked about the reasons for the possible gap in education geared towards health professionals on human trafficking, Kling said, “I think early on the role of the healthcare provider with human trafficking had not been clearly identified, it is now more of a public health agenda. I also think, at times, it can be difficult to teach as well.”This led a medical student at Mayo Clinic in Arizona to work with faculty and staff to develop a curriculum targeted to health care professionals to help identify and provide resources to victims of human trafficking.According to Jennifer Talbott, a third-year medical student at Mayo Clinic in Arizona, “I felt that something had to be done. It was surprising that it wasn’t that much out there to train people taking care of patients with an issue so important, like human trafficking. There was this big hole that no one had quite filled yet.”Kling further described the importance of developing the human trafficking curriculum.

“Looking at how often human traffic victims work with health care professionals and present to the emergency rooms, it gives us the opportunity to identify if they are been trafficked and try to help them out. It’s important to teach students how to do that,” she said.The curriculum is integrated into the first year of a medical trainee’s history taking lessons and highlights the importance of looking at warning signs.In regard to changes in the curriculum, Kling says, “We teach them to look at red flags like having 15 to 20 sexual partners in one month, if the patient has someone else in the room with them and the person does not want to leave and or unusual tattoos that many perpetrators use to mark their victims. We teach them to directly ask “have you ever been sold for money, shelter or food?”Jennifer Talbott stated, “The curriculum teaches you to pay attention to vulnerable populations like LGBTQ, people with mental illness, and substance users. It doesn’t have to be obvious things like STIs or broken bones but subtle issues that need more attention like why a patient has not been able to get on top of manageable chronic issues like asthma or hypertension.”In the future, they plan on expanding the curriculum and integrating it into more training programs across the nation.According to Talbott, “If you are dealing with patients for any length of time, this curriculum is applicable to you. This is a very large issue and everyone should have a basic understanding of what this is.””We have already evaluated the curriculum with pre and post testing and will present and publish that information. We also plan to work with the American Medical Women Association and their affiliate organization, Physicians Against Trafficking Humans to look for best practice models and make it available nationwide,” Kling said about the goals of the project.The importance of identifying victims and providing resources is an international responsibility and starts with education.Kling offered a very important warning, “One of the myths is that people think human trafficking is only an international girl’s problem but as we have seen lately with the increase in numbers locally and worldwide, it’s an everybody-problem. It doesn’t matter if you are black, white, international or a U.S. citizen. It affects you. All of us needs to be aware.”If you or someone you know is being subjected to human trafficking contact the National Human Traffic Hotline: 1-888-373-7888 (TTY: 711) | Text 233733 Copyright © 2020, ABC Audio. All rights reserved.