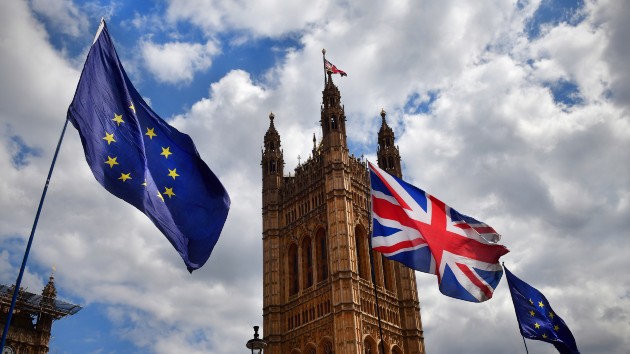 oversnap/iStock(LONDON) — It took one referendum, two general elections, three prime ministers and nearly four years, but on Jan. 31, the U.K. will finally be leaving the European Union.For anyone following the path to Brexit since the U.K. voted to leave the EU in June 2016, the actual moment of departure may seem a rather drab affair. No more dramatic resignations, no more historic government defeats, no more cries of “order” amidst the chaotic scenes of a parliament that seemed to be tearing itself apart.Instead, when the U.K. is out of the EU, it will be commemorated with a light show on Downing Street, a clock countdown from 10 p.m. local time (an hour ahead of the official departure) and a commemorative “Brexit coin” that will be put into circulation.After years of politicking, delays and seemingly interminable arguments, in the end — in the words of Prime Minister Boris Johnson — Britain appears to have “Got Brexit Done.”Yet this year will be crucial in how a post-Brexit Britain defines itself and its relationship with Europe and the U.S.Brexit turnaroundAfter more than three years of interruption, the turnaround from Brexit deadlock to “Brexit done” could not have been more decisive.To recap the turn of events, Boris Johnson assumed the role of prime minister in July 2019 with the issue of Brexit more uncertain than ever. His predecessor, Theresa May, had failed on numerous occasions to pass her Brexit deal through Parliament, which she had spent the best part of two-and-a-half years negotiating. As a result of those failures, lawmakers successfully voted to push back the original Brexit deadline of March 31, 2019 to Oct. 31, early last year.Johnson, who was elected to replace May by members of the Conservative Party but not the general public, was hamstrung by the same problems as his predecessor — having no majority in Parliament to pass through a Brexit deal.The early weeks of his tenure were dramatic to say the least.Johnson negotiated a new (albeit similar) deal with the EU, promising to deliver Brexit “do or die” on the new Oct. 31 deadline. When it became clear that the same group of lawmakers who frustrated May’s Brexit would provide no assistance, Johnson attempted to suspend Parliament to force Brexit through — and in doing so was ruled by the Supreme Court to have lied to the Queen.Lawmakers, despite Johnson’s pledge, voted to delay again, setting up the general election on Dec. 12.But the general election result was more decisive then many observers predicted. Johnson ran on a platform to “Get Brexit Done,” and, by winning a landslide majority of 80 seats, passed through his Brexit deal in its entirety in January.

‘A seismic moment’ in British historyAll those years of political wrangling and Johnson’s decisive election victory set up Jan. 31 as the new departure date.Even so, there is still so much up in the air in terms of the relationship Britain has with the EU and the rest of the world. Although Britain will cease to be a member of the EU after 11 p.m. on Jan. 31, a transition period is in place until the end of the year. During this period, the U.K. will remain in the economic single market and customs union while it negotiates its future relationship with the trading bloc.“It’s more complicated than getting Brexit done on 31 Jan, but this is still a seismic moment in British history,” John Rentoul, the chief political commentator for the Independent, told ABC News in an email. “Nothing will change on 1 Feb, except our representatives won’t go to EU meetings and EU nationals won’t be allowed to vote in our local elections.”The terms of the current deal delineate how Britain will withdraw from the EU, but did not lay out the terms of any future trade deal with the economic bloc. The main issue for the government will now be negotiating that deal during the rest of the calendar year, Rentoul said.The government of Prime Minister Johnson has vowed to “unleash Britain’s potential” once they have delivered on Brexit.“The biggest challenge is negotiating the trade relationship with the EU for after the end of the transition period in December this year, but the growing assumption is that this will be handled by a series of temporary agreements, which means the negotiations will become a permanent, rolling adjustment,” Rentoul said. “Overall, we will probably become poorer than we would otherwise have been, but it will be gradual and if people are a bit better off they won’t notice.”In the short term, the U.K. will not feel the impact — either the economic downturn or the potential rewards — of leaving the EU, but it remains a significant moment, Rentoul said.“Being out of the EU will make a huge psychological difference,” he said.The process, now, is not reversible.Yet it is not until New Years’ Day 2021 that the U.K. will be fully withdrawn from EU laws. The withdrawal will come either under the terms of a new trade deal or, if no deal is agreed by both parties,will  revert to World Trading Organization rules — meaning that new tariffs and quotas could be enforced overnight. That could have severe economic consequences for both sides, as no replacement to the previous trade benefits of EU membership would be in place.

The US/UK trade deal?If the trade deal with the EU is the biggest practical challenge post-Brexit Britain faces, arguably its biggest symbolic one is a potential free trade deal with the U.S.With the transition period lasting until the end of this year, advocates for Brexit have long looked across the Atlantic for a headline-grabbing post-Brexit trade agreement.Both Johnson and U.S. President Donald Trump have touted the possibility of a trade deal, with the American leader promising the prime minister a “magnificent” agreement in September.Meeting with his British counterpart on Saturday, U.S. Treasury Secretary Steve Mnuchin says the United States remains positive about a trade agreement.”I’m quite optimistic (about a deal). I think the prime minister and the president have a very good relationship,” Mnuchin told an audience at the Chatham House think tank in London on Jan. 25.Despite the treasury secretary’s optimism, a cross-Atlantic trade deal could face several roadblocks.

“Bilateral trade talks will be tough. Johnson is keen to highlight the economic benefits of Brexit to a divided electorate, with the biggest prize being an American free trade agreement,” Amanda Sloat a Robert Bosch senior fellow at the Center on the United States and Europe at Brookings, told ABC News.“However, Trump will not do Johnson any favors and prides himself on a being a tough negotiator. The sides will face difficult discussions over controversial issues such as agriculture, environmental standards, and pharmaceutical pricing,” she added.While Trump has expressed his desire to open up the U.K.’s state-owned National Health Service (NHS) to private American companies to provide services in a future deal, Johnson has repeatedly said it would not be involved in any agreement.In recent weeks, the United States has threatened tariffs on U.K. car manufacturers if Johnson’s government introduces a digital tax on tech companies like Apple, Amazon and Facebook, which the Trump administration believe would have a disproportional effect on American firms.Another source of tension is the U.K. government’s announcement that Chinese telecommunications Huawei would help build the country’s 5G network, which could also jeopardize a future trade agreement with the U.S.Despite the Trump administration’s warnings that Huawei could hand over British data to the Chinese government, the U.K. government decided to go ahead with the arrangement. Secretary of State Mike Pompeo has described the move as a “momentous decision” for the U.K, quoting a British lawmaker who said that “the truth is that only nations able to protect their data will be sovereign.”However, many observers argue a post-Brexit trade deal will have little effect on the United States.“Any deal would have too small an impact to move the needle on economic growth, both in the short and longer term,” Michael Pearce, a senior economist at Capital Economics, an economics research consulting firm, told ABC News.“(U.S.) exports to the UK were $140 billion in 2018, and the trade surplus was just $18.6 billion, less than 0.1% of [U.S.] GDP. Doubling those exports and the trade surplus would therefore add only a tenth or so to GDP, over what is likely to be a long time horizon,” he added.With so much still up for grabs, what is clear is that the debates of the last few years — the impact on the economy, British sovereignty and future trade deals with the U.S. — are likely to dominate U.K. politics through 2020 at least.With a large majority in Parliament, however, Johnson has far more authority to lead through these times than any of his recent predecessors. Copyright © 2020, ABC Audio. All rights reserved.