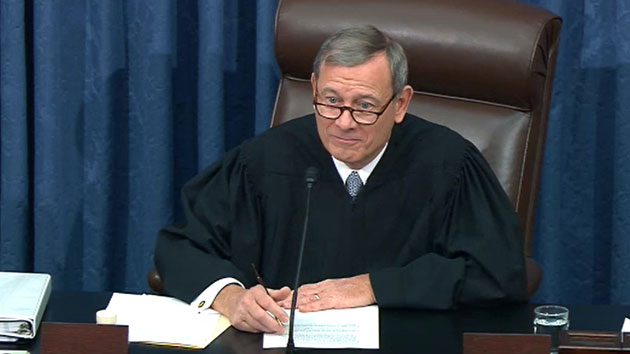 Senate Television via Getty Images(WASHINGTON) — Democrats are increasingly looking to get Chief Justice John Roberts involved in the debate over witnesses in the impeachment trial as Republicans claim they have the votes to block testimony from former national security adviser John Bolton and others.Sen. Chris Van Hollen, D-Md., has said he plans to introduce a motion on Friday that would call for Roberts to rule on subpoenas for witnesses, documents, and questions on executive privilege around the additional information Democrats’ want to bring into the impeachment trial.“No Republican can question the fairness of this approach- the Chief Justice oversees the highest court in our land and was nominated by a Republican President. And, given his authority to rule on questions of privilege, they should not fear a drawn-out process,” Van Hollen wrote in a statement posted on Twitter.“I urge my colleagues to seek out the truth and the facts and to vote in support of my motion. Anything else constitutes an effort to hide the truth,” he said.After a second day of questions to House managers and Trump’s legal team on Thursday, the Senate could move to a debate and vote over witnesses as early as Friday afternoon.Though Republicans say they are confident they have the votes to defeat witnesses, Democrats are also expected, by way of a motion, to push Roberts to break a tie, should the witness vote end in a 50-50 split on Friday.House managers and the president’s defense team disagreed on whether the chief justice has the ability to rule on witnesses under the current rules of the impeachment trial.Lead House manager Adam Schiff has also cited Roberts’ authority to rule on questions of witnesses, saying subpoenas and questions about executive privilege don’t need to spend months going through the courts when “we’re got a perfectly good chief justice sitting right behind me.””I trust the man behind me sitting way up where I can’t see right now. But I trust him to make decisions about whether a witness is materiel or not, whether it’s appropriate out a whistleblower or not, whether to– whether a particular passage in a document is privileged or not,” Schiff said Wednesday.The president’s defense team has argued that questions of witnesses would require a prolonged legal process as courts sort out claims of executive privilege and whether witnesses would be able to disclose information about their conversations with the president.“I think there was some suggestions earlier that we don’t need any other courts, we don’t need anything, the involvement of anyone else because the chief justice is here that’s not correct on the subpoenas at the front end, that’s not going to be something that’s determined just with all respect sir, by the chief justice that’s something that would have to be sorted out in the courts or by negotiation with the executive branch,” White House deputy counsel Patrick Philbin said Wednesday night.He added that while the chief justice could make an initial ruling on whether evidence is relevant or admissible any of his decisions could be overruled by majority vote.In the case of an impeachment trial Roberts is acting as the presiding officer, similar to how the vice president would preside over a matter where he or she could cast the deciding vote. So though Roberts has extensive powers to rule as chief justice of the supreme court in that capacity, his rulings can still be overruled by a majority vote of the Senate, according to the Congressional Research Service.“If a ruling concerning the admissibility of evidence is appealed (or if the Presiding Officer submits such a question), the question put to the Senate is: “Is the evidence admissible?,” a CRS report from January says, adding “The Senate, in short, is the final arbiter on any procedural questions.”That report also says that in the case of a tie vote the chief justice would not be expected to vote, as the vice president or another senator could when they preside, and that any tie vote during an impeachment trial defaults to the negative result.Van Hollen’s motion would still need a majority vote to change these rules to give the chief justice more authority and avoid the long delays threatened by the president’s legal team.Senate Minority Leader Chuck Schumer said Democrats are still focused on getting moderate Republicans like Sens. Susan Collins, Lisa Murkowski, and Lamar Alexander to vote in favor of witnesses.“Right now our focus is on getting four Republicans. We shouldn’t have to rely on what the chief justice will or will not do,” Schumer told reporters Thursday.“We need for Republicans to understand what the crisis that the president has created, to understand the weighty ness of the arguments and the fact that in impeachment, you must have a fair trial. That’s where our focus is now.” Copyright © 2020, ABC Audio. All rights reserved.