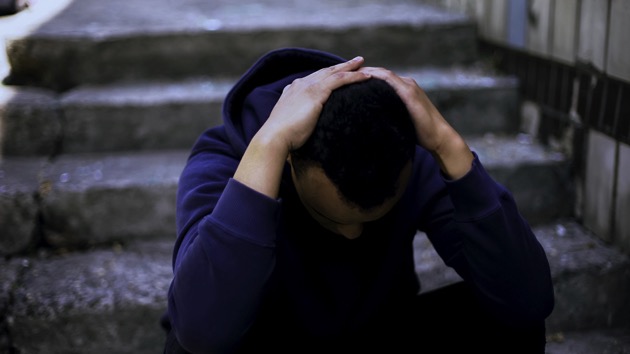 Motortion/iStock(NEW YORK) — Children are taking their own lives at an alarming rate in America, with suicide the second-leading cause of death among 10- to 19-year-olds in the U.S.The trend has impacted all communities, genders and socioeconomic populations — but young people are more likely to die by suicide in poverty stricken areas, according to a new study by JAMA Pediatrics.The study looked at nearly 21,000 cases of suicide from 2007 to 2019 and found that children between the ages of 5 and 19 were 37% more likely to die by suicide if they were from communities where 20% or more lived below the federal poverty level.”As a pediatrician, I found it troubling that the number of children dying by suicide had risen considerably over the last decade,” said lead author Dr. Jennifer Hoffman, pediatric emergency medicine physician at Ann & Robert H. Lurie Children’s Hospital of Chicago. “I was seeing more and more children visiting the ER over time due to having thoughts of wanting to kill themselves. Trying to reduce tragic and unnecessary deaths among children is central to the work that I do as a pediatric emergency medicine doctor.”Poverty has long been known to be associated with worse health outcomes in children, including infant mortality, chronic illnesses like asthma, and even injury. This study is one of the first to connect increased suicide rates to poverty in children and adolescents.”I chose to study poverty as a risk factor for suicide because we know that children living in poverty experience a number of other negative health outcomes,” Hoffman said.So why does it appear that poverty increases suicide rates among youths?According to Dr. A. Lee Lewis, division and training director of child and adolescent psychiatry at the Medical University of South Carolina, “Kids that are poor are already at a disadvantage. They don’t have the privilege of a great education, extracurricular actives and sometimes even supportive families. In many cases, they are struggling to survive. That stress can be very overwhelming and can worsen underlying depression, bipolar disorder or substance use, which can ultimately lead to unfortunate outcomes.”The study also found that children are nearly twice as likely to die by suicide via firearms in counties with high poverty rates.”More work needs to be done to figure out if there is a difference in availability of firearms or differences in safe firearm storage practices,” said Hoffman, who warns that “parents should safely store any guns present in the home.””From prior research, we know that most adolescents who die by firearm suicide use a gun owned by a family member,” she said.In vulnerable communities, experts say it’s important to be aware of any possible warning signs.”The number one thing I tell parents is to look for an increase in isolative behaviors, behaviors that are out of character, problems at school such as lashing out or defiant statements,” Lewis said. “Even a sudden start or increase in substance use or promiscuous behavior may be a clue. Overall, look for changes in behaviors and mood.””The number one predictor of completed suicide is previous suicide attempts,” he said. “Pay close attention to self-harming (like cutting and burning). Family history of suicide is another important risk factor.”Authorities say that preventing youth suicide is a very complicated issue, but focusing on things we can change is a start.”The truth is we don’t 100% know why teens are turning to suicide.” Lewis said. “We do know that identifying possible risk factors like poverty can give us clues. These clues can then help us to better screen, treat, and in the future hopefully prevent further suicide.”If you are in crisis, please call the National Suicide Prevention Lifeline at 1-800-273-TALK (8255) or contact the Crisis Text Line by texting TALK to 741-741.Copyright © 2020, ABC Audio. All rights reserved.