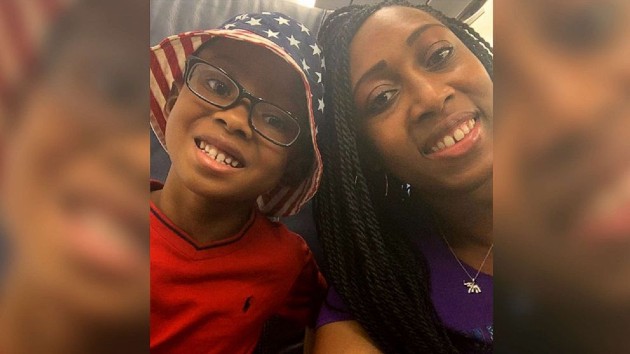 Kanesha Burch(NEW YORK) — Kanesha Burch says she could see her son, Antonio Gaylord, was “different.”Antonio’s verbal skills and abilities to express himself were delayed. He didn’t want to interact with other children and was very sensitive to sound as well as different food textures and colors. But when Antonio was rejected from three day cares, Burch felt she had to take matters into her own hands.”When I went to [the day cares], and I go, ‘OK, what’s the reason?"” she said. “They say, ‘We can’t meet your child’s needs."”Burch took Antonio, who was 3 at the time, to his pediatrician, where he was diagnosed with language expressive delay and autism spectrum disorder.”I had no knowledge on autism,” she said. “I was scared because I didn’t know how to help him.”She took Antonio to the Children’s Healthcare of Atlanta’s Marcus Autism Center to find out more. There, Antonio was given the same diagnosis he received at his pediatrician’s office.Burch says her instincts kicked in and she knew her education wouldn’t end there.”I’m his first line of help, so if I don’t know what to do, [don’t know] what resources are out there, then how can I help him?” she said.

Pursuing ABA therapyTo help her son, Burch decided to pursue her master’s degree in psychology with a concentration in applied behavior analysis, or ABA therapy, from Purdue University. She began the online program in 2016, complementing a degree in early childhood education she earned during undergrad.According to Dr. Cheryl Klaiman, program director of diagnostic services at the Marcus Autism Center, ABA therapy “is a type of therapy that uses positive reinforcement to shape and teach behaviors.” It involves breaking tasks down into small steps and teaching each step one at a time.”Given that tasks are broken down into their individual components and then taught through lots of practice, the individual gradually learns the skills needed for their success,” Klaiman told ABC News’ Good Morning America in an email.Klaiman says there are not enough resources for children to receive the recommended number of service hours of ABA therapy. But more programs are now coaching parents to be providers of ABA therapies for their children since going to school isn’t always an option.Burch was working as a pre-kindergarten teacher when she started to pursue her degree. She would work throughout the day, participate in her program, and then use what she learned to help Antonio and even some kids in her class.Throughout her program, she learned to help Antonio cope during anxiety-inducing experiences, and she helped him learn how to substitute those behaviors for others. She worked one-on-one with Antonio on his speech, letters and numbers, as well as his ability to sit and concentrate.Burch says the journey wasn’t easy and it took a lot of sacrifices. But in the end, getting the degree was definitely worth the time and energy. She finished her program and graduated in October 2018.”Just getting my master’s in ABA has made a tremendous difference in my life and his life as well,” she said.Moving forwardThanks to his mom’s help and his hard work, Antonio, now 6, interacts with other kids and can hold conversations with others.He was awarded Student of the Month and made A/B honor roll. For his honor roll ceremony, Antonio walked across the stage — something Burch says he wouldn’t have been able to do because of so much stimulation.With her degree in hand, Burch says she now knows how to advocate for Antonio in school and work with him when he’s home.Burch wants to change the stigma around children with autism that they are supposed to look and act a certain way.”So as his mom, I was on the go. I’m going to overcome those things. I want to prove those things,” she said. “They are capable of doing anything that any typical developmental child can do.”After her and Antonio’s experiences with day cares, Burch hopes more schools can be equipped to help children with autism or any disability.And her education doesn’t end there: Burch is currently pursuing another master’s degree, this time in early childhood education from Grand Canyon University. She hopes to use her degrees to start a day care.”If I can put myself in a situation where I can be a day care owner, I won’t turn those kids away because I understand what those children are facing and understand what those parents are going through, and I want to be there for them,” she said.