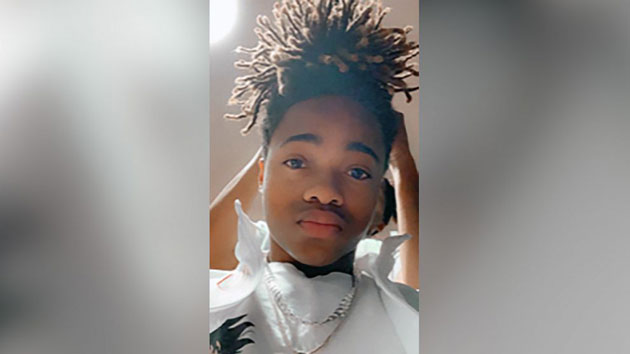 Courtesy of Sandy Arnold(MONT BELVIEU, Texas) — A Texas teen in the midst of a conflict with his high school over the length of his dreadlocks has received waves of support and a generous scholarship gift from celebrities.Deandre Arnold, a senior at Barbers Hill High School in Mont Belvieu, Texas, faced in-school suspension and possibly being banned from his graduation walk ceremony because the length of his dreadlocks violates his school’s policy.Arnold appeared on “The Ellen Show” and discussed the issue with his school over his hair length.”Every day I went to school I would be in dress code, but the thing with them is if [my hair] was let down I would be out of dress code,” Deandre told Ellen DeGeneres. “[The hair] can’t be in your face, past your ears or touching your collar.””Are there girls in your school? Do the girls have long hair?” DeGeneres asked.”There’s plenty of girls with long hair at my school,” said Deandre, who later added his hair is important culturally as part of his dad’s Trinidadian roots.”That’s what I don’t understand, I just personally think you should be able to wear your hair however you want,” DeGeneres said. “I don’t think it’s fair.”Deandre told DeGeneres he wants to go to college and become a veterinarian because “I’ve always loved animals, everything about animals … their sense of loyalty, their companionship, you can’t get that anywhere else.”In a surprise move, DeGeneres, who also made a plea for the school to change its policy, brought singer Alicia Keys onstage.”I am super proud of you for standing up for what you know is right,” Keys told the teen.She then presented him a $20,000 check to be applied to college from Shutterfly because “you’re a special person and you’re destined for such greatness.”Deandre’s mother, Sandy Arnold, told ABC News that in December, the school told her Deandre’s hair has to be in dress code.”The only way it could be in dress code, I would have to cut it,” she said — the issue being the length of the dreadlocks.Until he cuts his hair, Deandre was given the option of an in-school suspension (ISS), which typically means the student is removed from the classroom but remains on campus to continue schoolwork or attends an alternative school, his mother said. Either option would allow Deandre to graduate in a few months, but he wouldn’t be able to walk with his peers during graduation, Arnold said.Deandre has been home from school for weeks now as Sandy said it isn’t fair that he go to ISS when he did nothing wrong.Deandre’s cousin, 16-year-old Kaden Bradford, attends the same school and has been told he cannot return to school unless he cuts his dreadlocks as well, his mother, Cindy Bradford, told ABC News.Many across social media lent their support to Deandre and voiced their criticism of the school’s dress code.For many black Twitter users, the school policy was not just about hair length but what they felt was discriminatory practice against natural black hair.Rep. Shelia Jackson Lee of Texas wrote a series of tweets condemning the school’s policy: “As a senior member of the U.S. House Judiciary Committee, I am appalled to hear that #DeAndreArnold, a senior at Barbers Hill High School in Mont Belvieu, Texas, is being prevented from attending classes, walking in his high school graduation ceremony due to a racially-biased dress code mandate.”Houston Texans wide receiver DeAndre Hopkins also tweeted his support for the high schooler, saying, “Never cut your locks Deandre Arnold.”In response to the backlash, the school’s superintendent, Greg Poole, tweeted about the academic success of its black students.”[Barbers Hills] has received scrutiny regarding our high level of expectations on all things & dress code. Yet our African American students beat the state average on passing STAR by 22% & our overall passing scores are the highest in the state. Sounds like high expectations work!” the tweet read.Many pushed back on that tweet calling it tone deaf, and some perceived it as biased.Bernice King, the daughter of the late civil rights leader Martin Luther King Jr., tweeted in response, “Deandre’s locks do not reflect ‘lowness’ or a deviation from what should be a ‘high expectation’ at a school trying to reflect the Beloved Community.”