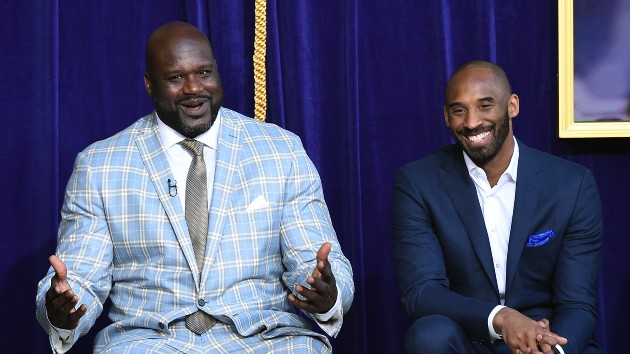 Kevork Djansezian/Getty Images(NEW YORK) — Shaquille O’Neal will pay tribute to his former teammate, Kobe Bryant, at his Super Bowl party in Miami.The Hall of Famer is hosting his Shaq’s Fun House carnival Friday night, and he’s dedicating it to those who died in the fatal helicopter crash on Sunday in California.All proceeds will be donated to the Kobe & Vanessa Bryant Family Foundation, as well as the family members of the victims who died with Kobe and his daughter Gianna in the crash.Shaq considered cancelling the party, then he decided to make it a charity event.”Kobe would want us to push through and celebrate life,” he wrote on social media. “Together we will celebrate all those who lost their lives in Sunday’s tragedy. RIP my brother, my friend, and my homie, The Black Mamba.”The legendary players won three consecutive NBA titles from 2000-2002, and following a feud, they became friends again in recent years.Shaq’s Fun House will feature performances by Diddy, Pitbull, DaBaby and more, with O’Neal spinning music as DJ Diesel.The Kobe & Vanessa Bryant Family Foundation is dedicated to assisting families in need. The Bryant family also created the Mamba Sports Foundation for youth athletes.Kobe’s wife, Vanessa, wrote on Instagram, “To honor our Team Mamba family, the Mamba Sports Foundation has set up the MambaOnThree Fund to help support the other families affected by this tragedy.”NFL Commissioner Roger Goodell says Bryant will be honored Sunday during the Super Bowl.”I did have the opportunity to meet [Kobe],” Goodell said, according to People. “He obviously brought a lot to our world and I think all of us not only feel for the tragic events to his family, but as well as everyone else who was a passenger on that helicopter.”Copyright © 2020, ABC Audio. All rights reserved.