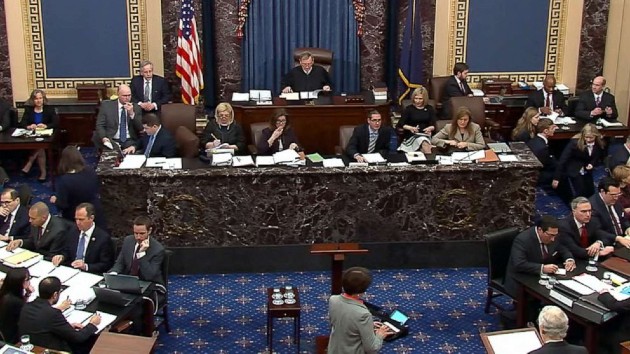 ABC News(WASHINGTON) — Senators spent a second day funneling more questions through the chief justice to House impeachment managers and President Donald Trump’s defense team.What they want to know provides some insight into what they’re thinking ahead of Friday’s highly anticipated vote on whether witnesses will be allowed at the Senate trial.It appeared on Thursday that Senate Majority Leader Mitch McConnell had enough votes to block witnesses and then move to what could be a vote on whether to acquit the president late Friday or Saturday.Here are three things to know about Thursday’s session:1) Democrats look to Chief Justice RobertsEven as Republicans seemed confident they have the votes to block witnesses, Democrats were looking to Chief Justice John Roberts to cast a potential tie-breaking vote.Democratic Sen. Chris Van Hollen of Maryland said Thursday that he also plans to introduce a motion Friday that would call on Roberts to rule on subpoenas of witnesses and documents, and on “any claims of executive privilege.”The president’s defense team, however, has argued that’s not something the the Constitution or Senate rules allow — that such matters would have to be resolved either by a Senate vote or in the courts.During Thursday’s proceedings, 2020 Democratic presidential hopeful Sen. Elizabeth Warren, D-Mass., pointedly asked about the legitimacy of the chief justice, the Supreme Court and the Constitution, as Roberts presided over a trial “in which Republican Senators have thus far refused to allow witnesses or evidence.”Lead House manager Adam Schiff said “the chief justice has presided admirably.””So, yes we don’t always live up to our ideals but this trial is part of our constitutional heritage that we were given a power to impeach the president,” Schiff said. “I don’t think a trial without witnesses reflects adversely on the chief justice. I do think it reflects adversely on us.”2) ‘Mixed motives’Most of the day was dominated by debate over the question of “mixed motives” — shorthand for the concept of whether, if a president has legitimate policy reasons for an action, does it matter if he had personal political motives as well?Its relevance to the Ukraine affair — and what his lawyers say was his concern about corruption — came up in a question from Sen. Susan Collins, R-Maine, and “other senators for both parties” when they asked if there are “legitimate circumstances under which a president could request a foreign country to investigate a U.S. citizen, including a political rival who is not under investigation by the U.S. government? If so, what are they and how do they apply to the present case?””I cannot conceive of circumstances where that is appropriate,” Schiff said. “It may be appropriate for the Justice Department, acting independently and in good faith. There’s a process for doing that.””If you conclude the president acted with mixed motives, some of them corrupt and some of them legitimate you should vote to convict. That principle is deeply rooted and common place in criminal and civil law going back centuries,” he said.3) Schiff: ‘You can’t make this stuff up’It was a moment that reflected the Democrats’ frustration battling with the president’s lawyers.Responding to a question from Democratic Sen. Mazie Hirono of Hawaii, Schiff described the situation as “something in the category of you can’t make this stuff up.”Schiff explained that while the Senate was hearing arguments about “whether a president can be impeached for essentially bogus claims of privilege for attempting to use the courts to cover up misconduct,” the Trump administration Justice Department that was “resisting House subpoenas is in court today.””So, the judge said if the Congress can’t enforce its subpoenas in court, then what remedy is there?” Schiff said. “And the Justice Department lawyer’s response is, impeachment. Impeachment. You can’t make this up.”In response, a Justice Department spokesperson said, “It is absurd for Chairman Schiff to portray our mere description of the Constitution as somehow endorsing the House Democrats’ impeachment process.” Copyright © 2020, ABC Audio. All rights reserved.