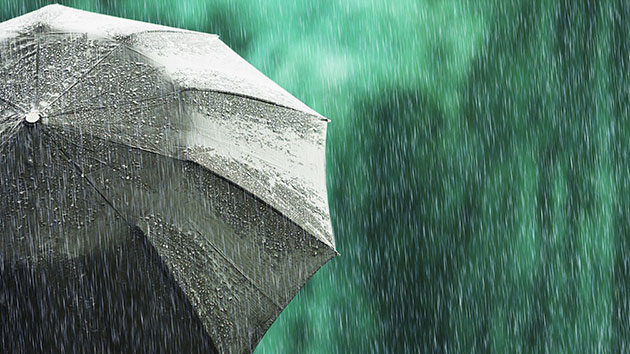 iStock(MIAMI) — A strong frontal system brought severe weather to southern Florida on Friday night, with numerous reports of flooding, lightning and gusty winds in the Miami metro area, as well as parts of the Florida Keys. A wind gust of over 50 mph was reported offshore of Islamorada, and flooded roadways were reported in Miami Beach.The severe weather threat is not over yet for southern Florida — storms will fire up again today as the front tries to clear the area, and damaging winds, hail, and brief tornadoes will all be possible in southern Florida later today.Additionally, any severe storm may cause flash flooding and have a significant amount of lightning.The good news is that the frontal system will clear Florida and the East Coast Saturday night, and a cooler, but sunny day is ahead for the Super Bowl on Sunday.A strong storm is currently moving onshore to the western U.S. and impacts from an atmospheric river are impacting parts of Washington State this morning. Heavy rain is adding to already saturated grounds in northwest Washington, where some spots have seen one of their wettest Januarys on record.More than 30,000 people are reported to be without power in Washington State, from gusty winds over 50 mph.Additional rain on Saturday will bring the risk for river flooding and landslides through the weekend.After a pretty quiet week of weather, this storm will move into the Rockies, before a part of this system travels across the rest of the country. First today, more heavy rain will move onshore to the Pacific Northwest.Then on Sunday and Monday, snow will move into the mountains. However, the most impactful concern will be the strong gusty winds along the cold front in California, where wind alerts have been issued for much of the state. Gusts, especially on Sunday night into Monday in Southern California, could reach 70 mph in some of the higher elevations. This could bring downed trees and power lines in the region.Then late on Monday, the snow will become more organized in the Rockies in Colorado and Wyoming.Locally an additional 1 to 2 inches of rain is expected in the Pacific Northwest through the weekend, and 1-2 feet of snow in parts of the Cascades and Rockies through Tuesday.A part of this storm will move into the central and eastern U.S. during the week, and will bring several impacts – including the potential for a multi-day severe weather event. Copyright © 2020, ABC Audio. All rights reserved.