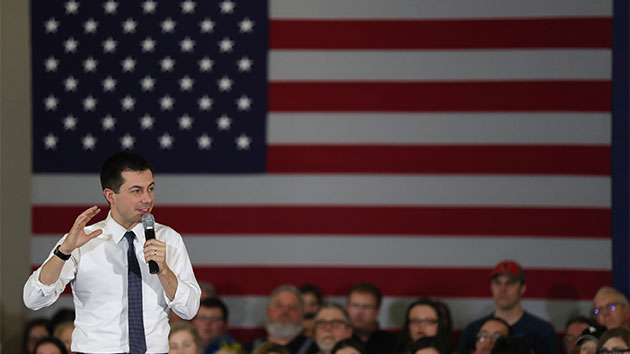 Joe Raedle/Getty Images(NEW YORK ) — Former South Bend Mayor Pete Buttigieg made a call for party unity Sunday on ABC’s “This Week,” saying that the party needs to make sure that 2020 looks nothing like 2016.He was responding to a video clip of Rep. Rashida Tlaib, D-Mich., a surrogate for Sen. Bernie Sanders, I-Vt., booing Hillary Clinton when the event moderator brought up Clinton’s critical comments of Sanders in her new Hulu documentary. “Nobody likes him,” Clinton said in the film, referring to members of Congress. Tlaib later apologized for her comments.”It is healthy that we have vigorous, honest and — I hope — respectful disagreements about approaches and about some of the details of what we believe in. But, at the end of the day, not only the majority of the Democratic Party, but the majority of the country believes in the things that we’ve got to do to do move — to move forward,” Buttigieg told ABC News Chief Anchor George Stephanopoulos on the eve of the Iowa caucus.”We have got to energize and galvanize, not polarize that American majority,” he added.On Saturday, the last Iowa poll before the caucus was abruptly cancelled after concerns from a respondent. CNN Political Director David Chalian announced that the CNN and Des Moines Register poll would not be released out of an abundance of caution.”It was brought to CNN’s attention earlier this evening someone questioned for the survey raised an issue the way their interview was conducted,” he said. “That means the results of the poll would have been compromised.”According to The New York Times, the poll was scrapped after one respondent said Buttigieg’s name wasn’t included in a telephone poll.Buttigieg told Stephanopoulos on Sunday, “my understanding is that there was an issue was raised and they decided to — to respond by withdrawing the release of the poll and I do think that at a moment like this where you got a president routinely attacking the press it’s worth remembering the integrity, and the seriousness with which reporters and press take the work that they do and wanting to make absolutely sure that it’s accurate and strong.”He also continued his jab at democratic rivals former Vice President Joe Biden and Sanders, calling for Iowa voters to turn the page on a new era of leadership.”If you want the candidate with the most time in D.C., of course I am not your choice,” Buttigieg said.”Remember, every single time in the last half-century — every single time that my party has won the White House — it’s been with a candidate who was new to national politics, opening the door to a new generation focused on the future,” he added.