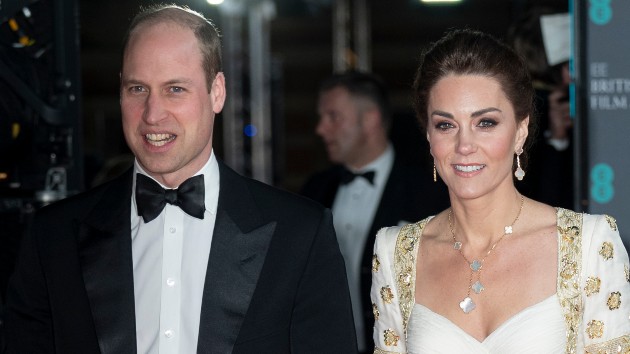 Mark Cuthbert/UK Press via Getty Images(LONDON) — The Duke and Duchess of Cambridge joined stars of this year’s biggest movies in central London Sunday for the annual British Academy Film Awards.Kensington Palace noted that William is celebrating his 10th year as president of the British Film Academy and presented its highest honor, The Fellowship, to film producer Kathleen Kennedy.Duchess Kate chose to wear a dress from one of her favorite designers — British label Alexander McQueen. She wore a long white tulle gown with delicate gold flower details.British Vogue noted that Kate previously wore the dress in 2012 during the Cambridges’ tour around Southeast Asia and the South Pacific in honor of the queen’s Diamond Jubilee.Diversity at the BAFTAs is once again a talking point; all of the nominated actors this year are white, and there were no female filmmakers among those nominated for best director or best film.Joker led with 11 nominations for its gritty and dark portrayal of Batman’s disturbed nemesis, played this time by Joaquin Phoenix — who won the award for best leading actor.Director Quentin Tarantino was nominated for his outlandish reimagining of the murders of actress Sharon Tate and several friends in Once Upon a Time… in Hollywood, and Martin Scorsese got a nod for The Irishman, but both fell short of Sam Mendes, who won the best director award for World War I drama 1917.The film 1917 also won best British film and best film — after taking the same award at the Golden Globes.Among Hollywood stars gracing the awards at London’s iconic Royal Albert Hall were Phoenix, Brad Pitt, Renee Zellweger, Scarlett Johansson, Al Pacino, Charlize Theron, Adam Driver and Saoirse Ronan. Zellweger took home the award for leading actress for her portrayal of Judy Garland in Judy.BAFTA rules allow an actor to be nominated twice in the same category for different roles, and Australian actor Margot Robbie is making history for being shortlisted as best supporting actress for her performances in both Once Upon A Time… In Hollywood and Bombshell.However, she found herself in a storm of criticism directed at the British Academy for nominating a white actor twice while no nonwhite actors were included in the category.Despite the two nominations, Laura Dern ended up winning for Marriage Story.The BAFTAs are also making changes with a green initiative. Guests have been asked to make “sustainable fashion choices” and avoid wearing new outfits for the occasion, instead recycling clothes they have previously worn.Food served at the dinner will be from sustainable sources and there will be no single-use plastics at the event.BAFTA chairwoman Dame Pippa Harris also said guests would go home with a “gifting wallet” made from recyclable plastic, in place of the usual goodie bags filled with champagne and luxury beauty freebies. Copyright © 2020, ABC Audio. All rights reserved.