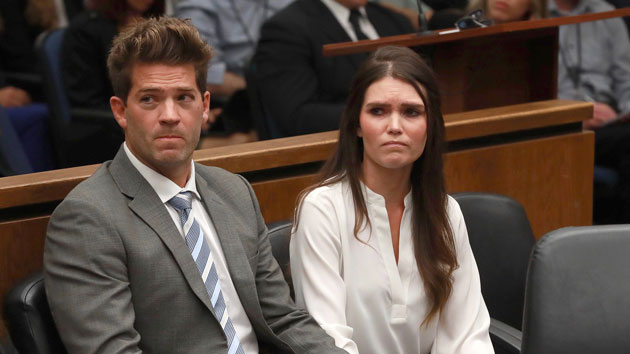 Allen J. Schaben / Los Angeles Times via Getty Images(LOS ANGELES) — Prosecutors are seeking to dismiss charges in a high-profile sexual assault case against a Southern California orthopedic surgeon and his girlfriend who were accused of kidnapping, drugging and raping several women in 2018.Dr. Grant William Robicheaux, 39, and Cerissa Laura Riley, 32, were accused of targeting women on dating apps, in multiple cities, and then drugging and sexually assaulting them while they were unconscious or incapacitated. But the Orange County District Attorney’s Office on Tuesday said there isn’t evidence to prove such a case against them.Orange County District Attorney Todd Spitzer said his office would seek to dismiss all charges against the couple and claimed his predecessor, Tony Rackauckas, mishandled the case.Robicheaux had appeared on the Bravo TV reality show “Online Dating Rituals of the American Male,” and Spitzer, who was running against Rackauckas when the charges materialized, accused Rackauckas of using the high-profile case for political gain during his campaign run.Prosecutors initially said there were more than 1,000 videos to support the case, but on Tuesday Spitzer claimed said there was “not a single piece of evidence or video or photo that shows an unconscious or incapacitated woman being sexually assaulted.”The couple was charged with 17 counts each, with Robicheaux being charged in connection with seven victims and Riley in connection to five. They both pleaded not guilty.Spitzer, elected in November 2018, said he ordered a new team of prosecutors to examine the case once he took over. They reviewed the charges and concluded that there wasn’t enough evidence to prove the case beyond a reasonable doubt, he said.”What happened to their lives and how this case materialized is nothing short of a travesty,” Spitzer during a press conference Tuesday. “I didn’t create this situation, but it’s my responsibility to fix it.””This office will always be fair. We will never try to manufacture evidence, manipulate evidence, put on a case or do anything that’s not respectful of both the victims and the defendants,” he added.He apologized to the alleged sexual assault victims in case, although he noted that some of the women only came forward after hearing the allegations to simply support other women.”There’s nothing more difficult to now explain to victims that because of governmental overreaching they were used to enhance the facts of the case,” Spitzer said. “It was the misstatement of 1,000 victims that brought more than 100 phone calls into this office … it was the misstatement by this governmental agency that led to more people coming forward.”He said his office plans to go to court “as soon as possible” to seek dismissal on all the charges. A lawyer for one of the victims, identified only as Jane Doe No. 4, said he would like an independent review of the case. He said his client would be devastated if the case was dismissed because, she maintains, she was sexually assaulted.Philip Cohen, an attorney for Robicheaux, said the doctor’s life was ruined and his career will never be repaired. The medical board took away his license after he was accused. He said it’s highly likely Robicheaux will be taking legal action. Copyright © 2020, ABC Audio. All rights reserved.