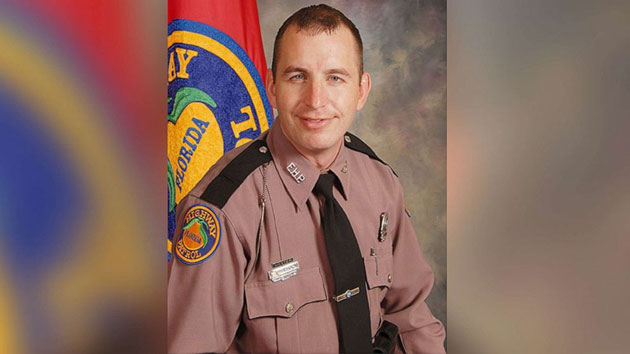 FLHSMV(WEST PALM BEACH, Fla.) — A Florida Highway Patrol officer was killed in the line of duty Wednesday when he was shot by a disabled motorist he was apparently trying to help, authorities said.At about 10:15 a.m., Trooper Joseph Bullock was assisting a motorist with a disabled car on Interstate 95 in Martin County, near West Palm Beach, when the motorist shot him, Highway Patrol Colonel Gene Spaulding said.A police officer who was passing by then shot and killed the suspect, Spaulding said.

I95 at 107mm will be shut down in both directions for several hours due to officer involved shooting. Investigators are assembling. Please avoid area. pic.twitter.com/8X78TZQtlW

Bullock, 42, was a leader within the highway patrol who trained and mentored new hires, Spaulding said.Bullock served nearly 19 years with the highway patrol, officials said. He was also an Air Force veteran, officials said.Spaulding called his death a “tragic, tragic, loss.””It’ll take a long time for the Florida Highway Patrol to heal,” he said at a news conference.”The entire Florida Highway Patrol and FLHSMV family is heartbroken as we mourn the tragic loss of Trooper Joseph Bullock,” Spaulding and Florida Department of Highway Safety and Motor Vehicles Executive Director Terry Rhodes said in a joint statement.”Please keep his family and his team members in your prayers,” they said.Bullock’s death comes one day after an Alabama police officer, Nick O’Rear, was gunned down in the line of duty.Copyright © 2020, ABC Audio. All rights reserved.