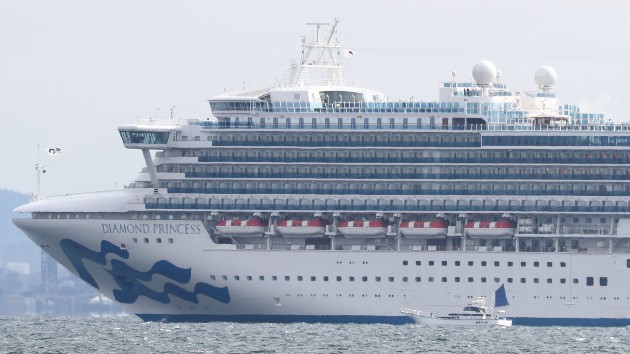 BEHROUZ MEHRI/AFP via Getty Images(GENEVA) — There’s a small window of time in which to contain the novel coronavirus, the head of the World Health Organization said at a Wednesday news conference.”Invest today or pay more later,” Tedros Adhanom Ghebreyesus, WHO’s director general, told the international community.The WHO is requesting $675 million over the next three months, with the bulk of those dollars supporting countries with underdeveloped health infrastructures to prepare for the risk of coronavirus.Tedros also highlighted the $100 million that the Bill and Melinda Gates Foundation has pledged to fight the global coronavirus outbreak.”This pledge from the foundation will help us in speeding up the research,” he said.There is not yet a proven effective treatment for the new coronavirus.In Japan, fears about how the new coronavirus could affect the 2020 Olympic Games, which are slated to take place in Tokyo this summer, have bubbled to the surface, with a top Olympic official saying that organizers were “extremely worried” about coronavirus disrupting them.In the meantime, at least 10 people aboard a cruise ship moored in Japan have tested positive for the novel coronavirus, officials said.Since arriving at the Japanese port of Yokohama, the Diamond Princess has been quarantined at sea while all passengers and crew on board undergo health screenings. The 10 people who tested positive for the newly identified virus have been taken ashore to a hospital in the coastal prefecture of Kanagawa, according to a statement from Japan’s Ministry of Health, Labor and Welfare.”Quarantine of the cruise ship continues to be implemented,” the ministry said.A spokesperson for Princess Cruises, which operates the ship, said that those who tested positive include three Japanese guests, three guests from Hong Kong, two Australian guests, one American guest and one crew member from the Philippines. There were 2,666 guests and 1,045 crew members aboard the Diamond Princess. Approximately half the guests are from Japan, according to the cruise line spokesperson.The Diamond Princess will remain under quarantine in Yokohama with everyone on board for at least 14 days, as required by the Japanese health ministry, the Princess Cruises spokesperson said.”The ship plans to go out to sea to perform normal marine operations including, but not limited to, the production of fresh water and ballast operations before proceeding alongside in Yokohama where food, provisions, and other supplies will be brought on board,” the spokesperson said in a statement Tuesday night. “Guests will continue to be provided complimentary internet and telephone to use in order to stay in contact with their family and loved ones, and the ship’s crew is working to keep all guests comfortable.””Princess Cruises will continue to fully cooperate with and follow the instructions of global medical authorities and the Japanese government,” the spokesperson added.The California-based company has already cancelled the next two Diamond Princess cruises departing from Yokohama.American author Gay Courter and her husband Phil, who are among those on board the quarantined ship, told ABC News they have been “confined” to their room, a mini suite, and the crew has halted room service.”As far as jail cells go, it’s pretty elegant,” Courter said in an interview Tuesday. “It’d be a lot more pleasant if we can get food.””Right now, the ship is in crisis mode,” she added. “This is very serious and scary.”Courter, whose 1995 book I Speak For This Child: True Stories of a Child Advocate was nominated for a Pulitzer Prize, said she and her husband are running low on their prescription medications. Courter is diabetic and takes insulin.”I don’t have 14 days’ worth,” she said. “We need to get out of here while we’re still healthy.”The first cases of the new coronavirus were detected back in December in the Chinese city of Wuhan, which has since become the epicenter of the epidemic. By Wednesday, Chinese state-run media was reporting 24,347 confirmed cases and 490 deaths on mainland China.More than 200 cases have been confirmed in more than two dozen other nations and territories, including 11 cases in the United States. The WHO has declared the outbreak a global health emergency.The new coronavirus causes symptoms similar to pneumonia that can range from mild, such as a slight cough, to more severe, including fever and difficulty breathing, according to the U.S. Centers for Disease Control and Prevention (CDC).The United States has evacuated a number of its citizens from China amid the health crisis. Two charter flights from Wuhan, with a total of approximately 350 passengers, were slated to arrive at the Travis Air Force Base in Northern California on Wednesday morning. One of the planes will refuel at the base and then continue on to Marine Corps Air Station Miramar San Diego, according to a statement from U.S. Army Lt. Col. Christian Mitchell.Upon arrival at the final destination, all travelers will be screened by CDC medical personnel and placed under a federally mandated 14-day quarantine. The U.S. Department of Defense “will work closely with our interagency partners and continue to provide support to the situation as requested,” Mitchell said. Copyright © 2020, ABC Audio. All rights reserved.