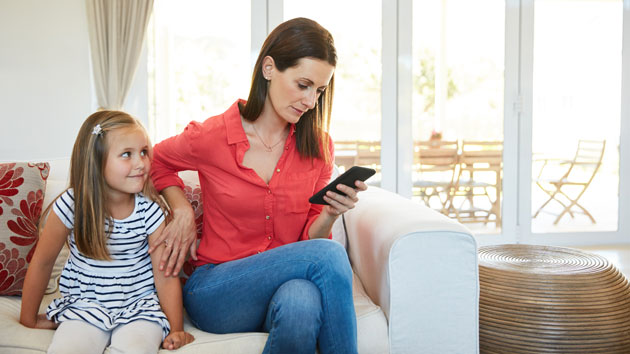 laflor/iStock(NEW YORK) — “Phubbing” is the act of snubbing someone in favor of your phone. And while parents probably think they’re usually the ones getting “phubbed” by their children, it turns out parents are just as guilty of choosing phones over interacting with their kids.”If you ask adolescents what they would change about their parents, the most common answer is ‘I wish they would spend less time on their phone and more time talking to me,"” Andy Crouch, the author of The Tech-Wise Family, told “Good Morning America.”While much of the conversation around mobile devices centers on how to set limits with children, parents are equally culpable.”Parents set the tone and the family agenda,” Crouch said.A recent study in the Journal of Adolescence found parental phubbing increased adolescents’ depression. Crouch, who is not associated with the study, told “GMA” that while phubbing is generally understood to be intentional disregard, when it comes to parents and kids it’s actually a lot more subtle.”The effect they found is related to what might seem like very benign behaviors — just having cell phones in sight — not what parents or children might think of as actual neglectful behaviors,” he said.A study released Wednesday from JAMA Pediatrics found increased parental distress and stress are associated with an increase in screen exposure in children as young as 7 to 18 months. With the demands of work and the world seeming to be 24-7, how can parents tailor their own behavior with mobile devices and, as a result, encourage their children to invest more time in human relationships rather the one with the screen?Four ways parents can get their (and their family’s) screen in check1. One hour, one day, one weekThis, Crouch said, is the tip almost all families tell him worked for them. For one hour each day, put the phone away and commit to not looking at it. “When my kids were young this was around bedtime — all the screens in the house were turned off,” he said. As they got older, they did this during dinner, he said.One day a week, he said, usually a Saturday or Sunday, the screens are off and put away.More: CEO pens viral post on work-life balance urging others to ‘pick family’One week a year, during vacation, there are no phones allowed (applicable to parents who receive vacation time, of course).2. Prepare for resistanceCrouch said the first third of these time frames — whether the hour, day or week — is uncomfortable. Be prepared to move through it. “In the first third, you’re so bored,” he said and still thinking about the phone. The second third is a readjustment period. The last third, Crouch said, is “amazing” adn added, “you find something has really changed in your relationships.”3. Ground yourself, literallyFor most of us, the first thing we do each morning is reach for our phones. Not doing so, Crouch said, is the most important thing he personally has done to get phone usage under control. Instead, he ignores the phone and steps outside his front door. “The phone has a way of making us think we’re the most important person in the world. Going outside makes me remember I am not — I’m just one creature in a vast universe.”4. The 7-minute ruleCrouch said this is an adaptation of something he read in the book “Reclaiming Conversation: The Power of Talk in the Digital Age” by Sherry Turkle.”The first seven minutes of conversation are easy,” he said. “That’s just about enough time to talk superficially about the weather and catch up.”It’s right around that 7-minute mark, he said, where conversation becomes a little harder and we reach for our phones. It’s right about then when we “phub” our kids.”But if you can keep the conversation going and not pick up the device,” Crouch said, “there’s usually something wonderful waiting on the other side.” Copyright © 2020, ABC Audio. All rights reserved.

Only about half of US adults are meeting physical activity guidelines: CDC