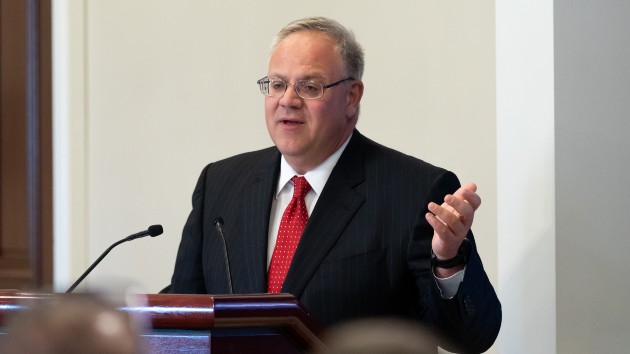 Official White House Photo by Stephanie Chasez(WASHINGTON) — Secretary of the Interior David Bernhardt was named this year’s “designated survivor” for the State of the Union address, meaning he skipped the event and would assume power if an attack or disaster struck the Capitol and rendered all government officials there incapacitated.The State of the Union is attended by the president, both houses of Congress, members of the Cabinet and Supreme Court justices.Bernhardt served as the acting secretary and deputy secretary of the Interior before President Donald Trump nominated him to officially serve in the role in February 2019.He has worked at the Interior Department, which manages the country’s public lands, for nearly a decade and served in numerous roles, including as solicitor from 2006 to 2009. Before that, Bernhardt was a former partner and shareholder at Brownstein Hyatt Farber Schreck.Bernhardt’s nomination didn’t come without criticism. Some Democrats previously had said he had too many connections to companies regulated by the Interior Department.Bernhardt, like those before him, spent the evening in a secret, secure and remote location.He tweeted before the event that he was looking forward to hearing Trump’s address.Last year’s designated survivor was former Energy Secretary Rick Perry. The year before, it was Agriculture Secretary Sonny Perdue. Copyright © 2020, ABC Audio. All rights reserved.