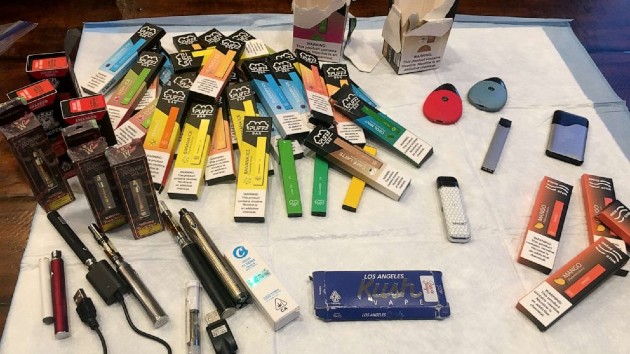 Bonnie Halpern-Felsher(WASHINGTON) — Executives from some of the largest e-cigarette companies are set to face questions about their role in the rising rates of e-cigarette use and nicotine addiction among young people in a congressional hearing on Wednesday.Federal officials and lawmakers on both sides of the aisle have raised concerns about products such as Juul and other e-cigarette brands in recent years.Last year, the Trump administration announced a new policy aimed at reducing the number of young people using e-cigarettes by banning sweet and mint flavors for cartridge-based products like Juul, but leaving menthol and tobacco flavors on the market.The federal tobacco age was also recently raised to 21.The “flavor ban” goes into effect this week, but advocates say it contains major loopholes that leave other flavored products on the market, and that young people are already moving from Juul to other nicotine products like Puff Bar — a disposable, single-use e-cigarette.Company executives will also be questioned about these other flavored nicotine products that remain on the market.Surveys of teenage vape users show that Juul is overwhelmingly the most popular device, but advocates are increasingly raising concerns that the federal ban on some flavored products doesn’t include other flavored products like disposable cigarettes or liquids used in refillable devices.Meredith Berkman of the advocacy group Parents Against Vaping E-cigarettes said her group of concerned parents was completely surprised to see a footnote in the Food and Drug Administration’s enforcement plan, specifying that disposable e-cigarettes, which are thrown away after one use, would not specifically be included in the federal ban on flavored vaping products that use replaceable cartridges, as first reported by The New York Times.Berkman said advocates have pressed the FDA to include all flavored products in the ban, including the disposable e-cigarettes, and that they’ve pressed lawmakers to question the companies about the other products in Wednesday’s hearing.”It’s all part of the same thing,” she said, adding, “I hope their feet are held to the fire.”The federal government hasn’t published data on the number of middle and high school students who report using disposable e-cigarettes, though it is part of the National Youth Tobacco Survey. However, Stanford University pediatrics professor Bonnie Halpern-Felsher said teachers and students in schools she works with report more teenagers are using the cheaper, single-use products.”Overwhelmingly in the last six months, what we hear is Juul, yes, but really it’s these disposables, and they don’t even say disposables, these educators and the students will say Puff Bar … and that is what we’re hearing that is going on right now,” she told ABC News.Halpern-Felsher said it’s difficult to know if the administration’s flavor ban prompted teenagers to switch to the disposable products, but that the flavors and high nicotine concentration can still attract younger users. She believes all flavored products should be taken off the market.”We know that youth are using these products in record numbers, and the products that I have in my hand right now I’m looking at this, you know, green lush ice and this peach, beautiful peach colors and flavors and these blue ice, blueberry ice and, you know, things like that. I’ve got a rainbow of colors in front of me, that was just given to me and these have a tremendous amount of nicotine in them too, these products,” she said.The FDA says it has the ability to target any e-cigarette company or product targeting young people under the new enforcement plan, even though the definition of e-cigarette in the document specifically excludes disposable, single-use products.”Let us be clear: Under this policy, if we see a product that is targeted to kids, we will take action,” Mitch Zeller, director of the FDA’s Center for Tobacco Products, said in a statement. “We will continue to use our regulatory authority to tackle this alarming crisis that’s affecting children, families, schools and communities. We will also continue to closely monitor data regarding youth usage of all e-cigarette products and adjust our enforcement priorities to address youth use as necessary.”House Energy and Commerce Committee Chairman Frank Pallone said the hearing will focus on e-cigarette companies’ marketing practices and what they are doing to prevent young people from using their products and becoming addicted to nicotine. Leadership from some of the largest e-cigarette companies, including Juul, Reynolds American Inc., and NJOY are all scheduled to testify.The executives are expected to focus on the steps their companies have taken to stop young people from using their products while keeping some options on the market for adult users.Juul voluntarily pulled its sweet flavors from the market last year and later stopped selling and distributing mint after data showed its popularity among young people. The company also stopped advertising on social media after investigations from the FDA and Congress focused on marketing strategies they said targeted young people.The Wall Street Journal reports that NJOY, which manufactures a disposable e-cigarette product, decided to voluntarily stop sales of its fruit flavors amid concerns that teenagers will use them as a replacement for Juul and other cartridge flavors impacted by the ban.Lawmakers are expected to question the executives on whether they are doing enough to address the epidemic of nicotine addiction among young people and their role in the increasing popularity of e-cigarette and vaping devices among middle and high school students, including whether marketing for the products targets or is appealing to teenagers.Copyright © 2020, ABC Audio. All rights reserved.