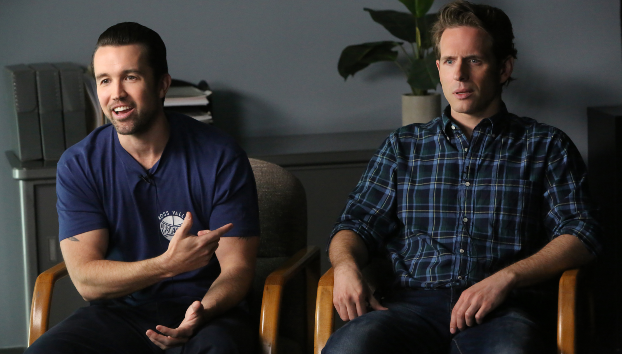 L-R – Rob McElhenney, Glenn Howerton — Patrick McElhenney/FXX(NEW YORK) — From a show that started as a no-budget pilot episode shot on a camcorder, FX’s brutally funny It’s Always Sunny in Philadelphia is poised for its 15th season, which will make it the longest-running live action comedy series in American TV history.

The show stars co-creators Rob McElhenney, Charlie Day and Glenn Howerton, and is also produced by Megan Ganz, the latter of whom is about to debut a new Apple TV Plus show called Mythic Quest: Raven’s Banquet. That new series, co-created by McElhenney, has him playing the egomaniacal creator of a popular World of Warcraft-like game.  Yet the pair tell ABC Audio that Sunny will shine on.

“When you make a show about people who are such sociopaths, essentially, and almost cartoonishly evil, in terms of comedy, the only way it works is that it’s clear the human behinds behind it are not, right?” said McElhenney, addressing the secret of show’s staying power. “That it’s clear that we’re having fun…”

He adds, “I think that the most important thing, as I think about it over the 14 years is that we all love each other truly. People talk about this in terms of TV shows and movies all the time, ‘You were family.’ But we are literally a family. We’re all married to one another.”

He’s not kidding: McElhenney’s married to his co-star, Kaitlin Olson, Day is married to featured Sunny player Mary Elizabeth Ellis, and Howerton met his wife, Jill Latiano, after she appeared on an episode.

McElhenney laughs, “That’ll be spin off, as our children become the stars of the show.”