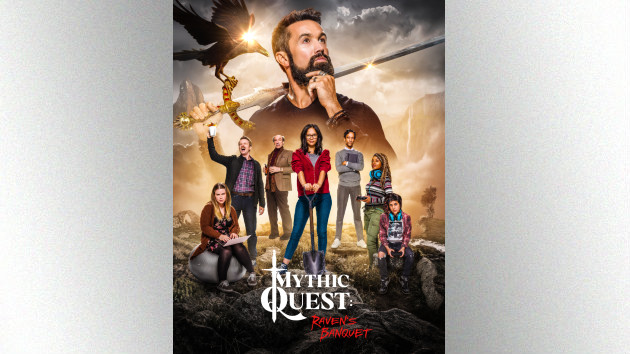 The cast also includes Oscar-winner F. Murray Abraham, as well as Community’s Danny Pudi, Charlotte Nicdao, and Sunny’s David Hornsby, who, as with their other show, also produces.

McElhenney sports a beard reminiscent of Twitter founder’s Jack Dorsey, but he tells ABC Audio the usually black-clad character is an “amalgam” of a few creative directors he met while researching with Ubisoft, the gaming company that’s co-producing the show.

“Some Criss Angel just sprinkled in there,” Ganz adds, referencing the illusionist. “[O]nce they started putting those rings on Rob and he’s like clicking them together…that’s when I saw the transformation.”

Nicdao plays Poppi Li, the game’s head designer, who butts heads with Grimm. She credits the producers with avoiding a common sitcom trope: “I think that was really something that we were trying to steer clear of the woman that comes in and is like, ‘Stop having fun!"”

She adds, “I think that the fun thing…is you might sort of read her as being the sensible one…And then…you see that her ego is just as destructive as Ian, Rob’s character…as the season goes on.”