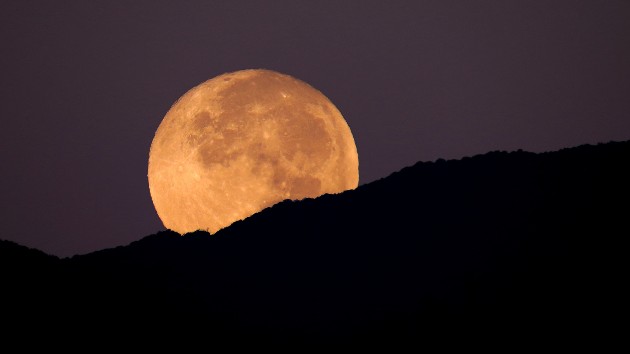 CochiseVista/iStock(NEW YORK) — The moon will hit your eye like a giant snowball this weekend.The “snow moon,” which is the first of four super moons scheduled to take place this year, will rise this weekend and reach its peak around 2:33 a.m. ET Sunday, according to astronomers.The moon will appear bigger and brighter than normal because the full moon will be taking place near its perigee, when the moon’s orbit puts it closest to Earth, according to Rick Fienberg, a spokesman with the American Astronomical Society.”From the astronomers’ point of view there is nothing particularly special about a super moon; however, most people tend to notice it more when it’s this bright,” he said.Native American tribes were the ones that started the “snow moon” moniker. The full moon’s light made the snow-covered ground extra bright, according to NASA.Viewers who miss this weekend’s super moon will have more chances to catch the event this year. Three more super moons are scheduled for March 9, April 8 and May 7, according to astronomers.Fienberg said the April super moon will be about 4,500 kilometers closer to Earth than the February one.”We have anecdotal evidence that more people look at the moon when it’s a super moon,” he said. “It’s great to have more people to look up in the sky and appreciate it.”Copyright © 2020, ABC Audio. All rights reserved.