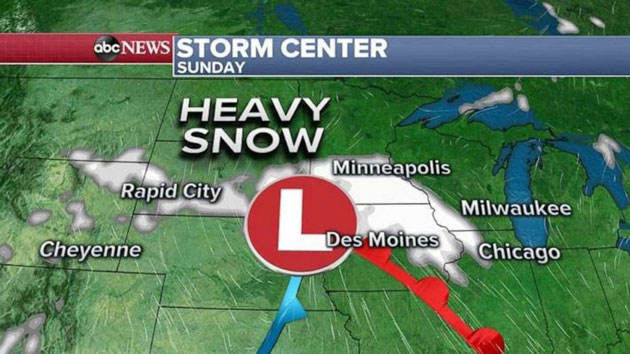 ABC News(NEW YORK) — The powerful storm that crossed much of the country this week and brought powerful winds, heavy rain and heavy snow to the Northeast on Friday is over — but a new storm is already set to track across the country and bring widespread weather impacts from coast to coast, including heavy snow and heavy rain, as well as a possible flood threat in the South early next week.The storm deepened very rapidly on Friday as it moved very quickly through New England, setting some notable low pressure readings in parts of the region.Some select snowfall totals include:17.5” in Madawaska, ME7.9” in Hastings, NH13.0” in Redfield, NY15.1 in Burlington, VTSome select peak wind gusts include:80 MPH wind gust in Truro, MA69 MPH wind gust in Atlantic City, NJBehind the storm there are some lingering snow showers moving through the Northeast. Some of that will be lake effect enhanced especially in parts of New York state. A weak disturbance will bring a little bit of snow to Indiana, Kentucky and Ohio this morning, which could briefly reduce visibility on interstates and highways.In the Southeast, there is a fast moving disturbance that will bring just a little bit of snow, freezing rain and rain to parts of Southeast Tennessee, northern Georgia, northeast Alabama, and the western parts of the Carolinas. Up to 4 inches of snow will be possible the hillier elevations, and 1 inch of snow could be possible on grassy surfaces in parts of the Atlanta metro area. This could result in icy and slippery roads in the region.In the West, more than a foot of fresh snow will be possible in the Colorado Rocky Mountains. Very difficult driving conditions will be possible in parts of the I-25 corridor today, with nearly impossible driving conditions in parts of mountains. Blizzard conditions will be possible on I-80 and I-25 in Wyoming today with wind gusts reaching 70 mph in spots.Meanwhile, a new storm is already moving through the Northwest and will race across the country this weekend bringing widespread weather impacts that will last into next week. There are wind alerts out for parts of the West, along with winter weather advisories and winter storm warnings with this system. It is also worth noting that parts of the Northwest are still seeing significant river flooding due to the very wet January.Additionally, new winter weather alerts are being issued for parts of the Midwest from South Dakota to Wisconsin.The storm will move quickly into the Rockies later Saturday with heavy snow for the Cascades and northern Rocky Mountains. With the extending cold front comes gusty winds, and there could be wind gusts up to 50 mph into parts of California including the San Francisco area.On Sunday the storm will slide into the Midwest and bring heavy snow from the Dakotas to Minnesota and Wisconsin, and even into parts of the Chicago metro area.Then on Monday, the storm will expand with heavy snow moving into interior New England including much of New York, through New Hampshire and Vermont as well as Maine.However, the real concern will expand and shift southward as moisture interacts with a frontal boundary slowing down in the South. Numerous rounds of heavy rain and thunderstorms will be possible in the first few days of the upcoming week.The result of all of this is 1-2 feet of snow will be possible for the Cascades this weekend, with gusty winds possible as well. Locally, 6-8 inches will be possible in parts of southeast Minnesota and parts of Wisconsin through Monday with the passing storm.In the Northeast, 3-6 inches of snow will be possible in areas that just received more than 10 inches in the past couple days. For most of the Northeast this is very welcome.And in the south, a big concern is up to 6 inches in parts of the South through early next week. This could cause flash flooding and river flooding in the upcoming week.Copyright © 2020, ABC Audio. All rights reserved.