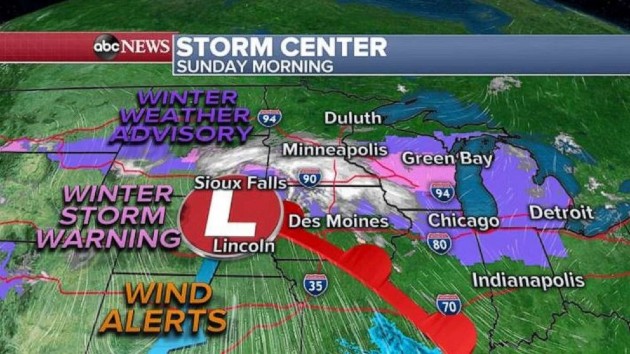 ABC News(NEW YORK) — A quick moving weather system brought a round of snow to northern Georgia on Saturday. Up to eight inches of snow was reported in the Blue Ridge Mountains and many northern suburbs of Atlanta saw a couple of inches quickly pile up.A new storm is racing across the country on Sunday with heavy snow moving into parts of the Dakotas, Minnesota and Iowa. Snowfall rates in the next few hours could exceed one inch per hour in spots.This storm is rapidly moving off to the east, meaning the Winter Storm Warnings, as well as Winter Weather Advisories, are being expanded into parts of Michigan, Indiana, Ohio and Illinois, with Chicago now in the Winter Weather Advisory.Heavy snow is expected to impact Chicago; Green Bay, Wisconsin; Milwaukee and Grand Rapids, Michigan by the middle of Sunday morning. Locally, three inches of snow will accumulate in the area, with winds gusting at times over 30 MPH which could cause low visibility.By Monday morning, this storm will impact the Northeastern U.S., with rain for the big I-95 cities and snow for the interior Northeast. However, the main focus with this system will shift southward into the Ohio Valley and further south as a frontal system begins to stall out.Heavy rain develops along the frontal system from Pittsburgh all the way to Dallas. As the front turns more stationary through the first few days of the week, a couple of disturbances will keep bringing heavy rounds of rain across the Southern U.S. from Texas to the Carolinas, and rain could be heavy at times with the possibility of rainfall rates exceeding one inch per hour.By Tuesday, another system will begin to work through the four corners region, and bring snow to the southern Rockies while continuing to push more moisture into the stalled frontal system.The result of this complicated pattern is, locally, three to six inches of snow from Minnesota to Michigan and into parts of New York, Vermont and New Hampshire.However, the main concern this week will be the several rounds of heavy rain in the Southern U.S. Through the middle of the week, the rain forecast shows a rather widespread area of three to six inches or more of rain from eastern Texas into parts of Alabama and Tennessee.There are several concerning notes in the forecast for the southern U.S., including additional moisture, instability along the stalled frontal boundary, strong upper level dynamics and surface heating by midweek which will bring a significant severe threat to parts of this region by Wednesday — especially from Louisiana to Alabama — where preliminary thinking is that all severe hazards, including tornadoes, destructive winds and hail will be possible.Later this week, it appears that several rounds of heavy rain will target this area again and, by the end of the week, rainfall totals have the chance to exceed well past 6 inches of rain from Texas to Georgia.There are parts of the south that are well above average for precipitation for the year. For example, Jackson, Mississippi, and Birmingham, Alabama, are running more than double their average year to date rainfall so far.Given the forecast for widespread totals above six inches of rain, saturated ground across parts of this region, and ingredients for a significant severe threat on Sunday, it seems like it could be a dangerous and active week of weather across the country. Copyright © 2020, ABC Audio. All rights reserved.