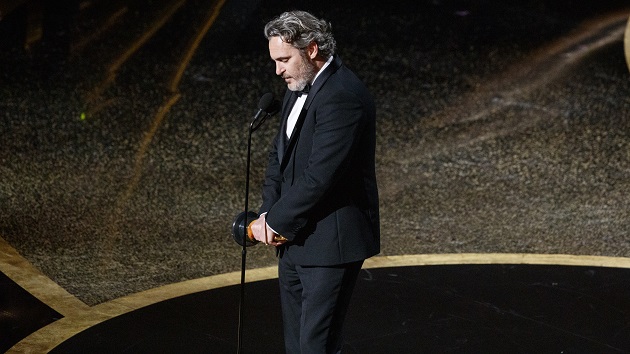 ABC/ARTURO HOLMES(LOS ANGELES) — When Joaquin Phoenix won best actor for his role in Joker, he used his winding speech to speak about a number of causes he is passionate about and speak about finding unity.

“I think that we’ve become very disconnected from the natural world…what we’re guilty of is an egocentric world view — the belief that we’re the center of the universe,” Phoenix said. “We go into the natural world, and we plunder it for its resources. We feel entitled to artificially inseminate a cow, and when she gives birth we steal her baby. Even though her cries of anguish are unmistakable. And then we take her milk that’s intended for her calf and we put it in our coffee and our cereal.”

Phoenix said that he believes sometimes people “fear the idea of personal change because we think that we have to sacrifice something to give something up.”

“But human beings, at our best, are so inventive and creative and ingenious, and I think that when we use love and compassion as our guiding principles. We can create, develop and implement systems of change that are beneficial to all sent yet beings and to the environment.”