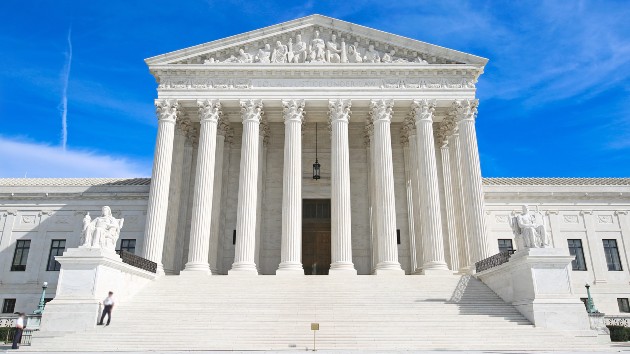 TriggerPhoto/iStock(WASHINGTON) — As the Supreme Court hears oral arguments in its first abortion case in four years, abortion rights advocates are warning of the political implications for senators in swing states who voted to confirm Justice Brett Kavanaugh. Although the court struck down a similar Texas law four years ago, saying it created an “undue burden” on abortion access, it decided to hear this case from Louisiana, June Medical Services v. Russo, after an appeals court approved the Louisiana law.But the Supreme Court has changed since the 2016 case with the additions of Kavanaugh and Justice Neil Gorsuch, who are seen as more conservative-leaning when it comes to reproductive rights. In particular, Kavanaugh replaced Justice Anthony Kennedy, who retired in 2018 — and who during his tenure represented the swing vote on abortion cases.Ilyse Hogue, president of NARAL Pro-Choice America, a group that supports keeping abortion legal, spoke exclusively with ABC News on the implications of the law, which requires abortion providers have admitting privileges with a nearby hospital, referring to it as “a backdoor way to eliminate abortion access with the sole purpose of closing clinics.” Her organization is putting pressure on the four senators from swing states who are gearing up for tough re-elections in November and voted to confirm Kavanaugh in 2018 — a confirmation that effectively tipped the court right — Susan Collins of Maine, Thom Tillis of North Carolina, Cory Gardner of Colorado and Joni Ernst of Iowa.Demonstrations are taking place outside the offices in each of the senator’s home state or Washington offices while the court hears oral arguments Wednesday morning. NARAL will also have a presence outside the Washington office of anti-abortion Democrat Dan Lipinksi of Illinois because, Hogue says, “they can’t think that nobody is watching.” “The demonstrations serve as an opportunity to remind voters in their states that Kavanaugh is on the bench and these cases about abortion access are under review because their senators green-lighted it,” Hogue said. “Between now and the election, we’re reminding voters in Maine and North Carolina and Colorado and Iowa that they put this guy on the bench, and they are responsible for rolling women’s progress back decades.”NARAL announced last December it would invest $34.7 million in 2020 electoral programs targeting voters in key states in an effort to hold incumbent politicians accountable for their votes and elect Democrats down the ballot. “You come after our rights, and we come after you,” Hogue said.On the other side of the argument, Jeanne Mancini, president of the anti-abortion group March for Life, said there is also a strong anti-abortion contingency outside the court Wednesday morning. While Manicini wouldn’t speculate on the political implications of the aforementioned senators, she did tell ABC News that what she called, “the pro-abortion lobby and pro-abortion politicians are out of touch with mainstream Americans.” Mancini said treating abortion differently than other outpatient facility surgeries lowers the bar for women’s health.Hogue, meanwhile, maintains those four senators are going to have a “very, very difficult time defending the vote” to confirm Kavanaugh if the Louisiana law is upheld, arguing that voters in those states overwhelmingly support abortion access. She pointed to one large group of the electorate she says politicians will have to answer to: white, suburban women who flipped the House of Representatives in 2018. “Senators who took this vote forsake all women in favor of political expediency, and is it going to come back and haunt them,” Hogue added.Specifically addressing Collins and Gardner, she said one technique voters might see leading up to the election is the senators distancing themselves as moderates on the issue “because they know their states and constituents actually support reproductive freedom,” she said. Public support for legal abortion is as high as it has been in two decades of polling, according to the Pew Research Center. As of 2019, 61% of Americans say abortion should be legal in all or most cases, while 38% say it should be illegal in all or most cases.”Our members are going to be out there every day to make sure those senators can’t hide from their votes. Them trying to position themselves in another way now is only further testimony that they knew when they took their votes [to confirm Kavanaugh] they were on the wrong side of history,” Hogue added.Hogue said this Supreme Court case isn’t solely about abortion access but will be indicative about how the new court will handle established precedents moving forward, given that a nearly identical law was ruled unconstitutional before the two new justices were added to the bench. “It should send a shiver down everybody’s spine because if they think they can get away with it on this case, then nothing is sacred,” Hogue warned. “It’s a very terrifying prospect, not just for human rights, civil rights and voting rights but for the fundamental basis of our democracy.” Copyright © 2020, ABC Audio. All rights reserved.