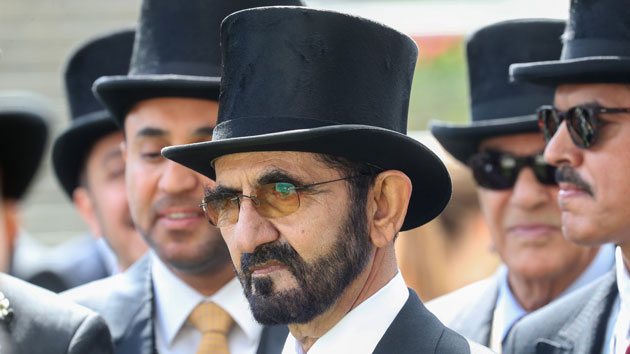 Chris Jackson/Getty Images(LONDON) — The ruler of Dubai orchestrated the abduction of two of his daughters, according to a U.K. High Court judgment published on Thursday, after a failed attempt by the Sheikh to suppress its contents being made public.Sheikh Mohammed bin Rashid al-Maktoum, the ruler of Dubai, and his sixth wife, Princess Haya bint al Hussein, had been involved in a protracted family court case in the U.K. after she fled the U.A.E. to prevent one of her children being forced into marriage.According to the judgment, the allegation that the Sheikh had “ordered and orchestrated the kidnap and rendition to Dubai” of two of his daughters “are of a very high order of seriousness” and may well involve civil findings of violations of international law could be in breach of international law.”At the conclusion of his fact-finding judgment, Judge Andrew McFarlane, president of the Family Division, found the “core allegations” of Princess Haya were true, which included the allegations of kidnapping two of her nieces and that the Sheikh had engaged in a campaign of intimidation and harassment toward her over the last year.Representatives of the Sheikh released a statement asking the press to respect the privacy of the children and saying that “[a]s a head of government, I was not able to participate in the court’s fact-finding process, this has resulted in the release of a ‘fact-finding’ judgment which inevitably tells one side of the story.”The court case has been the subject of intense media speculation for months, and while reporters were present throughout the hearing, media outlets were prevented from published details until now.ABC News had previously reported on the allegations laid out by human rights lawyers and friends of Princess Latifa, one of the Sheikh’s other daughters, who they claim had attempted to escape Dubai but was caught in March 2018. Her friend, Tiina Jauhiainen, who testified in the court case, told ABC News she helped Latifa attempt to escape after allegedly being subjected to “inhumane treatment” by her family, but they were apprehended while on a boat in the Indian Ocean. Latifa’s sister, Shamsa al Maktoum, attempted a similar escape in 2000 and has not been seen since, according to the activists.The fact-finding judgment also said the Sheikh had conducted a “campaign of fear and intimidation against the mother [Princess Haya],” and that the apart from a short statement of denial, the Sheikh “has not taken issue with the mother’s account.”It is now clear to see why Sheikh Mohammed did not want these judgments to be made available to the world,” David Haigh, a human rights lawyer who works with Jauhiainen and a co-founder of the Free Latifa campaign, which advocates for the release of Princess Haya’s niece, said in a statement. “They show him as someone unfit to be in charge of children, let alone a state that is an ally of the U.K. Much as it is a tragedy for the two children, he has with Princess Haya, it must also be a massive relief for her family to know they can continue their childhood without the malign presence that their father clearly presented.”The court’s rulings will now be seen by the United Nations, he said, and they hope that the judgment will now compel allies of the regime “to use whatever influence they have as leverage to end this brutal and corrupt regime’s abuse of human rights.”Copyright © 2020, ABC Audio. All rights reserved.

Trump-Biden transition live updates: ‘We’re all in this together,’ Biden says
Coronavirus live updates: US reports over 181,000 new cases ahead of Thanksgiving
Dialing into Pennsylvania GOP meeting, Trump shows no sign of concession
Food banks face growing hunger crisis ahead of the holidays during the pandemic
‘Defund the police’ movement six months after killing of George Floyd
Thieves steal thousands of dollars in toys meant for needy kids over Christmas from charity