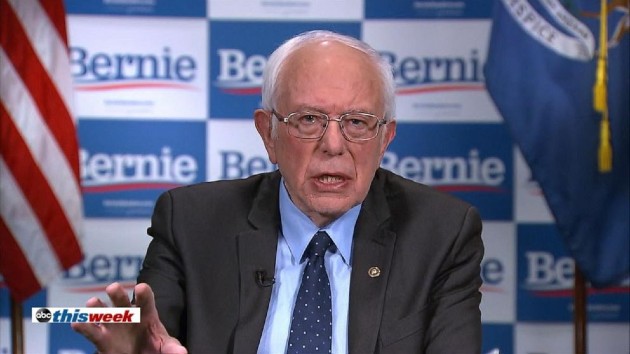 ABC News(WASHINGTON) — Rev. Jesse Jackson officially endorsed Sen. Bernie Sanders, I-Vt., at a rally in Grand Rapids, Michigan Sunday.Sanders supported Jackson’s 1988 presidential bid and helped Jackson score a primary win in Vermont. Now, as concerns mount about Sanders’ ability to garner the support of black voters, Jackson is returning the favor.”Later on today, we’re going to have the support — I believe here in Grand Rapids — of Jesse Jackson. And, as I think you well know, you know Jesse — Jesse has been one of the great civil rights leaders in the modern history of this country,” Sanders told ABC News Chief Anchor George Stephanopoulos Sunday on This Week, ahead of the endorsement. “He changed American politics with the concept of the Rainbow Coalition — getting the blacks and whites and Latinos together in ’84 and ’88. He’s been a leader in helping to transform this country, an aide to Dr. Martin Luther King, Jr., so we’re proud.”The endorsement comes after a poor performance on Super Tuesday, losing 10 of 14 states to former Vice President Joe Biden, including all of the Southern contests. It also comes shortly after Sen. Kamala Harris, D-Calif., tweeted her endorsement of Biden Sunday morning. She is the ninth former rival to back his presidential bid.Sanders is working to invigorate his efforts to reach African American voters, hiring one of its surrogates, justice reform activist Phillip Agnew, to shore up organizing in black communities. His campaign also rolled out a policy proposal dubbed “The Reproductive Health Care and Justice for All” which aims to tackle issues of access to reproductive health care and eliminate health disparities, namely black maternal mortality rates, which according to the Centers for Disease Control and Prevention, are three times higher for black women than for white women in the United States.The changes come as concerns mount about Sanders’ ability to garner a significant portion of the black vote after losses in the South.Sanders has previously blamed his struggles with African American voters on Biden’s connection to the first African American president, Barack Obama. In a press conference with reporters, Sanders said there could be other reasons he wasn’t doing well with the voting bloc.”I can’t give you a definitive answer. I think his tie to Obama is certainly one of the reasons,” Sanders said. “But there may be other reasons as well.”Sanders told Stephanopoulos that the results in Michigan won’t make or break his campaign but called it important to his path to the nomination.”Every state is important. Michigan is very, very important. Last time around, in 2016, I was told, ‘Impossible. You can’t win Michigan.’ In fact, the day before the election, we were 20 points down in some of these polls,” said Sanders.”I think we got a great shot to win in Michigan, I think we got a great shot to win in Washington, maybe some other states as well. We have a long, long way to go to the Democratic nomination. We’re going to fight for every vote that we can get,” he added.Sanders has been focusing his efforts in Michigan, canceling planned events in Mississippi, Missouri and Illinois to focus efforts on the Great Lake State.Much of his campaigning in the state has been about bringing out a diverse coalition to vote for him on primary day. Sanders’ campaign hosted an event in the predominantly Arab American, Muslim community of Dearborn, Michigan. The Detroit suburb heavily supported Sanders in 2016. Sanders also held a town hall in Flint, Michigan, with all-black female participants.When asked by Stephanopoulos to explain his poor performance in Super Tuesday states, Sanders said he believes that Sen. Amy Klobuchar, D-Minn., and former South Bend, Indiana, Mayor Pete Buttigieg suspended their campaigns under pressure from the “establishment” of the Democratic party.”One of the things that I was kind of not surprised by is the power of the establishment, to force Amy Klobuchar, who worked so hard, Pete Buttigieg, who, you know, really worked extremely hard as well, out of the race,” Sanders said. “What was very clear from the media narrative, and what the establishment wanted, was to make sure that people coalesced around Biden and tried to defeat me. So that’s not surprising.”Sanders also hinted at how far he far he would take his campaign should he not regain a delegate lead.”We will fight for every vote that we can as we try to win this election. I’m not a masochist who wants to stay in a race that can’t be won. But right now, that’s a little bit premature. Let’s not determine what will happen on Tuesday and what will happen in the future,” said Sanders. “I think we got a great chance to win Michigan, Washington, New York state, some of the major states that are coming up, but I think the people in those states have a right to cast a vote for the candidate that they want to see become president of the United States.”On the campaign trail, Sanders has expanded his criticism of Biden’s record. He’s hit Biden on trade, the war in Iraq and Wall Street bailouts. Now, Sanders has added Biden’s votes for the Defense of Marriage Act and support of the Hyde and Helms amendments, which prohibit federal funds to be used for abortions, to that line of attack.”I was there when the going was tough, Joe was not. In terms of DOMA, it was not an easy vote, as you will recall. All that I’m saying is people have a right to know who is going to be there when the going gets tough,” said Sanders.