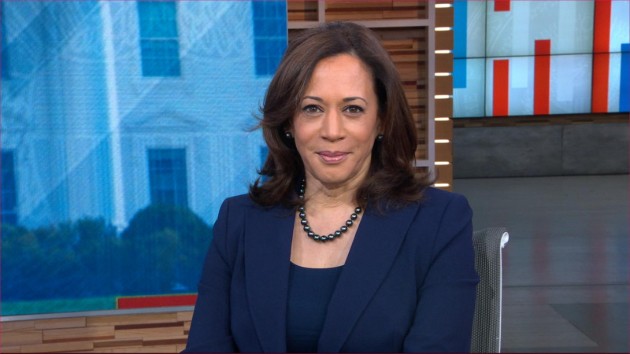 ABC News(WASHINGTON) — California Sen. Kamala Harris announced Sunday morning that she is endorsing former Vice President Joe Biden and will campaign alongside him in Michigan on Monday, becoming the ninth former presidential rival this cycle to back his bid.”When I started my run for president, I said America needs a president who reflects the decency and dignity of the American people; a president who speaks the truth; and a president who fights for those whose voices are too often overlooked or ignored,” Harris wrote in a statement released Sunday morning. “I still believe that to this day. That is why I am proud to announce I am endorsing my friend, Vice President Joe Biden, for President of the United States.”Harris also recorded a video praising Biden, adding that she will head to Detroit, Michigan, on Monday to campaign alongside him ahead of the state’s primary on Tuesday.”I have decided that I am with great enthusiasm going to endorse Joe Biden for president of the United States … I believe in Joe. I really believe in him, and I have known him for a long time,” Harris said in the video, posted on Twitter.

.@JoeBiden has served our country with dignity and we need him now more than ever. I will do everything in my power to help elect him the next President of the United States. pic.twitter.com/DbB2fGWpaa

A source familiar with the situation told ABC News that Harris and Biden spoke on Saturday, and Harris taped the video following their conversation. The California senator had been giving space to Sen. Elizabeth Warren, who remained in the race until Thursday, but once she exited the race, decided to move forward with the endorsement of Biden.In her statement endorsing Biden, Harris lamented the fact that numerous female candidates have ended their presidential bids this cycle, adding that she will “have more to say,” on the topic in the future.”Like many women, I watched with sadness as women exited the race one by one. Four years after our nominee, the first woman to win the nomination of a major party, received 3 million more votes than Donald Trump but still lost, we find ourselves without any woman on a path to be the Democratic nominee for president. This is something we must reckon with and it is something I will have more to say about in the future,” Harris wrote.Harris’ endorsement further underscores the divide within the Democratic primary as the field drastically narrowed over the last week. Biden quickly securing the endorsements of his former competitors has led to criticism from Sanders about nerves of “establishment Democrats””In the last few days what we have seen is consolidation. Political establishment was very very nervous, because you had a number of establishment candidates. And then the establishment candidates got out. Some of them, Buttigieg got out, Amy Klobuchar got out, Bloomberg got out and they consolidated around Joe Biden,” Sanders told reporters of previous Biden endorsements Thursday.Harris ended her presidential bid in December, prior to the Iowa caucuses, citing a lack of financial resources.

Biden and Harris have a long standing connection prior to the 2020 race. Harris worked closely with Biden’s son Beau, who passed away from an aggressive brain cancer in 2015. Biden tweeted his thanks to Harris on Sunday, noting her work alongside his late son.”Kamala — You’ve spent your whole career fighting for folks who’ve been written off and left behind — and no small part of that alongside Beau. From our family: thank you,” Biden tweeted.While her connection to Biden is long-standing, Harris also memorably clashed with the former vice president in one of the race’s most dramatic moments, challenging his record on civil rights during the first Democratic primary debate in Miami, Florida, in June 2019.”There was a little girl in California who was part of the second class to integrate her public schools and she was bused to school every day. That little girl was me,” Harris said, taking issue with Biden’s past opposition to busing as a means of desegregating American schools.Despite their bad blood, once Harris ended her campaign, Biden said during an early December campaign stop in Iowa he was “not good at keeping hard feelings,” and said he would consider Harris for any role in a possible Biden administration.”Of course I would,” Biden said when asked if he would consider Harris as a vice presidential nominee. “Look, Senator Harris has the capacity to be anything she wants to be … she can be president someday herself, she can be vice president, she could go on to be a Supreme Court justice, she could be attorney general. I mean she has enormous capability.” Copyright © 2020, ABC Audio. All rights reserved.