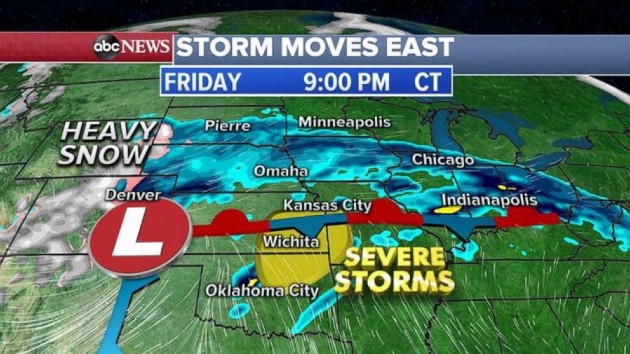 ABC News(NEW YORK) — A storm continues to move east as heavy snow falls in the west and hail falls in the Bay area. Up to a foot of snow fell from California to Wyoming and Montana as parts of I-80 had to be shut down overnight due to heavy snow.The complex storm system stretches from the Rockies into the Plains with heavy snow still falling in the Rockies Thursday.By Thursday night into early Friday morning, the entire western storm will move into the Plains and is expected to bring severe weather to the region.The first round of storms will be Thursday night from Kansas to Missouri with large hail and damaging winds.A second round of severe storms will arrive Friday afternoon into the evening hours from Oklahoma to Kansas and Missouri, where a few tornadoes are possible.By Saturday, the storm system really strengthens and moves north and east into the Upper Midwest and the Great Lakes with severe weather and flooding possible.The storm will stretch all the way down to the Gulf Coast with severe weather and damaging winds possible from Louisiana to Tennessee.It looks like the heaviest rain will be from Illinois to Indiana and into Ohio, where some areas could see more than 3 inches of rain, which could cause flooding.To the north and west of the storm, up to a foot of snow is possible in Colorado and Wyoming with 2 to 5 inches of snow possible for the northern Plains and western Great Lakes from Nebraska to Minnesota.As some parts of the country are forecast for snow and rain, the South is bracing for record heat.The official high of 89 degrees at New Orleans International Airport Wednesday broke the single-day record for March 25 by 5 degrees. It also tied the all-time record high for March at the airport.Here are all the record highs from Wednesday: Austin, Texas, 88 degrees; Del Rio, Texas, 98 degrees; Houston 88 degrees; Midland, Texas, 92 degrees; New Orleans 89 degrees; Tallahassee, Florida, 89 degrees; Mobile, Alabama, 86 degrees; West Palm Beach, Florida, 91 degrees and Jacksonville, Florida, 91 degrees.More record heat is expected in the South, with more than two dozen record highs that could be tied or broken Thursday. Some areas in southern Texas could hit 100 degrees.Copyright © 2020, ABC Audio. All rights reserved.