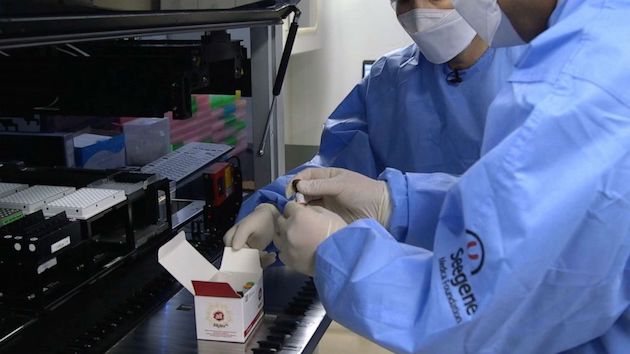 ABC News(NEW YORK) — South Korea has received requests from 121 countries to export or donate coronavirus testing supplies, according to one government official.

To meet the sudden surge of demands from foreign countries, Seoul has set up a task force with online updates and contact information of 29 Korean manufacturers and exporters specializing in COVID-19 diagnostic devices.

“Forty-five different countries are asking to get our product. They are asking us, sometimes from an embassy or some government or some president. They are sending [requests] directly by email [to me],” Dr. Jong-Yoon Chun, CEO of Seegene, told ABC News.

South Korea’s massive testing campaign since the country’s first outbreak on Jan. 20, together with intensive contact tracing, has helped to slow the spread of COVID-19. A total of 443,273 people have been tested, according to medical officials, and 174 patients have died.

While Europe and the United States struggle to find ways to contain the deadly virus, Seegene Medical Foundation’s doctors and scientists say other countries could perhaps replicate what they have done in the past nine weeks. In an exclusive tour of its diagnosis laboratory in Seoul to ABC News, Seegene revealed for the first time a stage-by-stage system that could test up to 15,000 samples in a day.

“It’s just a simple matter of collecting the instruments, putting them all together in one place, and getting the system running as soon as you can. Speed is very important,” Chun, Seegene’s CEO, told ABC News. “It is crucial to have a control tower giving clear guidelines and get the government sectors, health care workers and private sectors to work together. In our case, within only one month, everything was under control.”

The foundation turned an entire floor of its building into three operative rooms to process all the incoming COVID-19 samples.

Nationwide samples are collected in the basement parking lot and then each tube is immediately coded for identification. The entire diagnosis process is made up of three stages: extraction, amplification and analysis. In its first stage, sample tubes are carefully opened by lab specialists in a negative pressure room then moved into one of 17 sets of nucleic acid extraction instruments. This process is to extract and separate out the RNA, holding the virus’ genome, from everything else in the sample.

Next is what Seegene calls the “mixing” stage, or “pre-PCR setup.” Extracted materials placed on small palm-sized plates are each mixed with multiple reagents provided in test kits. It is a sensitive and lengthy process if done by hand as each sample must be added with four to six reagents in concise amounts. But Seegene’s lab uses nine sets of its own modified version of STARlet Hamilton automated liquid handling workstations that automatically mixes the elements, which then reduces human error or contamination during the process.

The number and type of reagents added vary depending on different test kit brands that offer their own choice of genes to target. Currently, most labs around the world use brands that target one or two from three types of genes — rdrp, N and E — as recommended by the World Health Organization.

“There are an alarming number of cases that turn out to be false negatives. Then you may have a silent carrier out and about spreading the virus to others. So it’s safe to have at least two types checked out,” Dr. Lee Wang-Jun, chairman of Myungji Hospital in Goyang, told ABC News. In other words, the entire process would have to be repeated twice. Seegene’s Allplex 2019-nCoV Assay offers unique technology designed to target all three genes in one single tube saving time.

“We put these three gene target detection in one tube and it can help us to facilitate our [diagnosis] process very fast,” Lee Dae Hoon, executive director at Seegene, told ABC News. “It can reduce the cost because we can run only one tube, not three tubes.”

A 90-minute process developed by Seegene amplifies tiny DNAs, converted from RNA, to make thousands of copies so that large enough amounts are available for a measurable result. Each machine can carry 96 samples.

The system then determines whether the virus is positive, negative or inconclusive. The total running time from extraction stage to analysis takes just five to six hours to process a total of 15,000 samples, according to doctors and researchers at Seegene Medical Foundation.

SolGent’s test kit targets the N gene and ORF1a gene and exports more than 95% of its product to 34 countries worldwide.