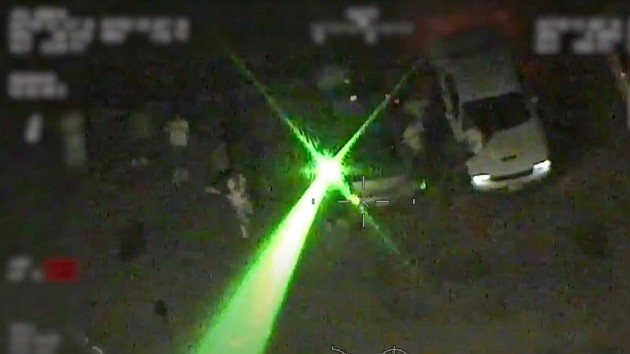 U.S. Customs and Border ProtectionBy MINA KAJI, ABC News(DETROIT) — A U.S. Customs and Border Protection (CBP) helicopter hovering over crowds of people at a Detroit protest on June 3 was struck multiple times by a green laser fired from across the U.S.-Canada border, officials said.”It’s like being hit with a camera flash at night time,” Phil Petro, the pilot, told ABC News’ transportation correspondent Gio Benitez. “You can have flash blindness and then not be able to see well.”Petro said he initially maneuvered the helicopter in an attempt to prevent the laser strikes from coming directly into the cockpit, but the perpetrator didn’t stop firing.”The behavior of the suspect was recalcitrant,” Petro said. “They knew what they were doing. They were aiming and adjusting their aim on purpose, with purpose to strike the aircraft repeatedly.”The CBP helicopter has special tools that can precisely pinpoint locations with help from local law enforcement.”Once they started hitting us again we were able to immediately put our camera system onto the offending individual, and then we were able to record them continue to get us with the laser,” Petro said. “This is great, direct evidence that will be used in courts and their prosecution.”The perpetrator, who police later identified as 22-year-old Ali Zuhair, was shooting the laser from Windsor, Ontario. He was charged in Canada with mischief, two counts of failure to comply with a release order and breach of probation order.Petro said he suffered some eye irritation after the strikes but considers himself lucky that he was not blinded.According to the latest data from the Federal Aviation Administration, there were over 6,000 reported laser incidents in 2019, up from 5,000 in 2018.Lasers can be a threat to larger commercial jets as well.In 2012, a JetBlue pilot suffered an eye injury after a green laser was pointed directly into the cockpit.It is a federal crime to shine a laser into a cockpit of an aircraft. Offenders could be sentenced to up to 20 years in prison and pay a $250,000 fine.

Mother of a teacher who died from COVID-19 also dies from virus, family says
In Pennsylvania, advantage Biden with a big boost from women: POLL
Cream of Wheat says it will remove Black chef from box that some consumers found offensive
Sophie Turner shares first photos from her pregnancy
Rainn Wilson powered through shooting ‘Blackbird’ while his home was threatened by wildfires
Biden preps for personal attacks from Trump ahead of Tuesday’s debate