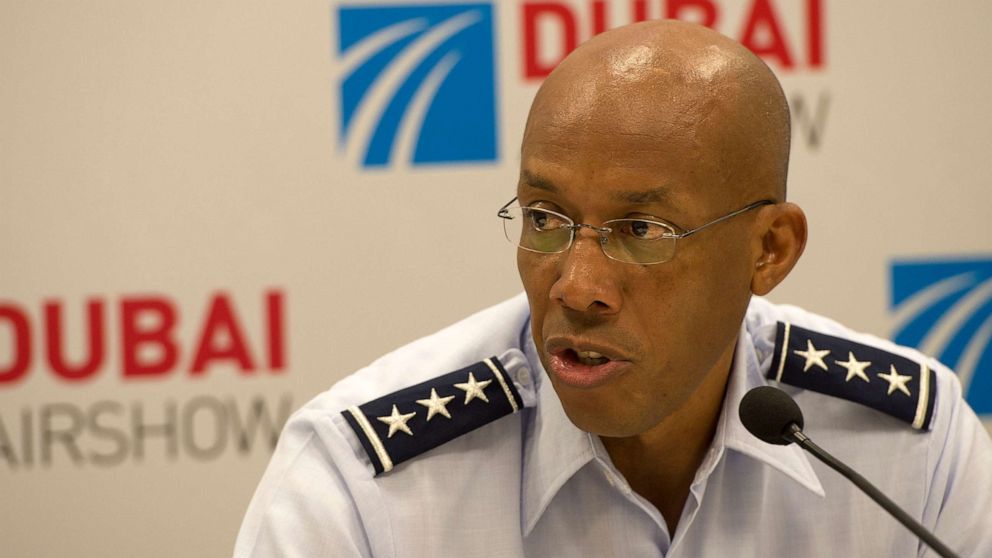 Tech. Sgt. Nathan Lipscomb/U.S. Air ForceBy ELIZABETH MCLAUGHLIN, ABC NEWS(WASHINGTON) — The Senate confirmed Gen. Charles Q. Brown Jr. as the 22nd Air Force chief of staff on Tuesday, a historic decision which makes Brown the first black military service chief and only the second black officer to serve on the Joint Chiefs of Staff.In a tweet, President Donald Trump called the 98-0 Senate vote “a historic day for America,” saying he is “excited to work even more closely with Gen. Brown, who is a Patriot and Great Leader!”A four-star general and former combat pilot who has served in the Air Force for 36 years, Brown currently leads Pacific Air Forces, a command which supports approximately 46,000 airmen serving mainly in South Korea, Japan, Guam, Hawaii and Alaska.The president nominated Brown for the position on March 2, but the general’s confirmation had been delayed as Republican Sen. Dan Sullivan of Alaska sought to use a legislative hold on the nomination as leverage for an aircraft basing decision.Sullivan lifted that hold late last week, so the historic vote came amid nationwide protests over the death of George Floyd at the hands of the Minneapolis Police Department — a death that sparked a larger dialogue about police brutality and racial inequality in America.In the aftermath of Floyd’s death, Brown spoke about being a black man in the United States and specifically in the Air Force in a powerful YouTube video titled “What I’m thinking about,” saying his own experiences “didn’t always sing of liberty and equality” — two principles he has sworn his entire adult life to protect as a member of the U.S. military, he said.Brown said he and his sister were the only black students in their elementary school and worked hard to fit in. Those feelings of being an outsider didn’t end in the Air Force though, he said, as he often found himself as the only black member of his squadron or the only black senior leader in a room.”I’m thinking about wearing the same flight suit with the same wings on my chest as my peers, and then being questioned by another military member, ‘Are you a pilot?"” Brown said in the video posted on June 5. “I’m thinking about how sometimes my comments were perceived to represent the African American perspective, when it’s just my perspective, informed by being African American.”The general said he rarely had black mentors and felt pressure to “perform error free, especially for supervisors that I perceived expected less of me as an African American.””I’m thinking about having to represent, to work twice as hard, to prove that their perceptions of African Americans were invalid,” he continued.On the eve of his confirmation, Brown said he was thinking about those who made this “extraordinary” nomination possible and the “immense expectations” that come with it, “particularly through the lens of current events plaguing our nation.”“I’m thinking about how I may have fallen short in my career and will likely continue falling short of all those expectations,” he said. “I’m thinking about how my nomination provides some hope but also comes with a heavy burden. I can’t fix centuries of racism in our country, nor can I fix decades of discrimination that may have affected members of our Air Force.””I’m thinking about how to make improvements, personally, professionally, and institutionally so that all airmen, both today and tomorrow, appreciate the value of diversity and can serve in an environment where they can reach their full potential,” Brown continued, adding that while he doesn’t have all the answers he wants “the wisdom and knowledge to lead those willing to stay committed and sustain action to make our Air Force better.”Brown commissioned into the Air Force in 1984 as a distinguished graduate of Texas Tech University’s ROTC program. According to his biography, he has commanded a fighter squadron, the U.S. Air Force Weapons School, two fighter wings, and U.S. Air Forces Central Command and served as the deputy commander of U.S. Central Command. He has more than 2,900 flying hours, including 130 combat hours.Brown succeeds Gen. David Goldfein, who is expected to retire later this year. He becomes the second black member of the Joint Chiefs of Staff, after Army Gen. Colin Powell assumed the chairmanship in 1989 having never served as Army Chief of Staff.”Gen. Brown’s unrivaled leadership, operational experience, and global perspective will prove crucial as we continue modernizing the Air Force to meet tomorrow’s national security challenges and protect our nation,” said Air Force Secretary Barbara Barrett in a statement on Tuesday.”There is no one I know who is better prepared to be Chief of Staff, no one who has the experience and the temperament to lead the Air Force,” Goldfein said. “The Air Force and our nation will be in good hands under his leadership.”ABC News’ Trish Turner contributed to this report from Capitol Hill.Copyright © 2020, ABC Audio. All rights reserved.

Black Americans are leaving their homes to start their own all-Black communities
Kentucky AG Daniel Cameron granted 48-hour delay in release of Breonna Taylor grand jury recording
Biden calls Trump’s debate performance a ‘national embarrassment’ as he kicks off train tour
How climate change affects wildfires, like those in the West, and makes them worse
‘Riverdale,’ ‘Charmed’ among shows halted due to lack of COVID-19 testing in Vancouver
Trump’s failure to condemn white supremacy at debate part of well-established pattern