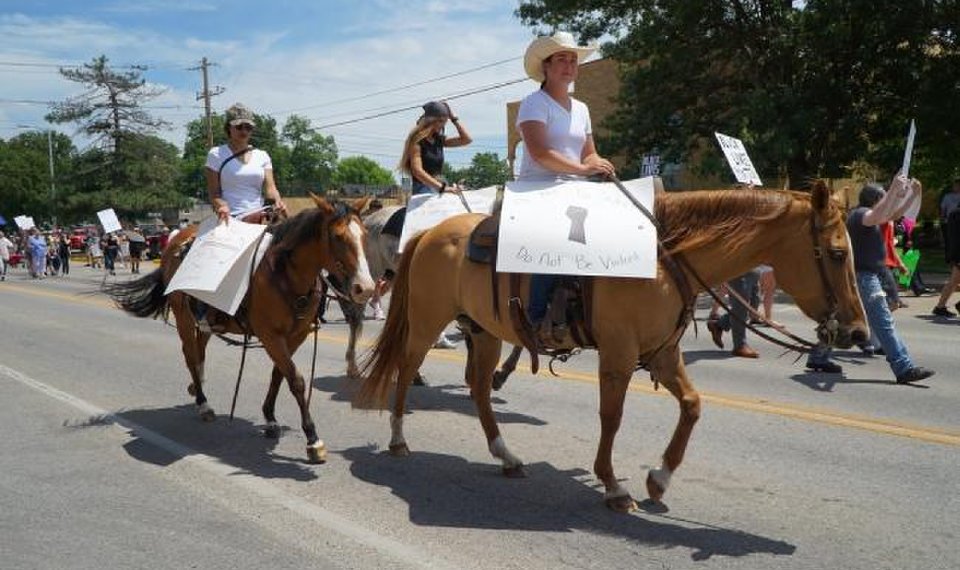 (Ponca City, OK) Ponca City put a unique spin on protesting as hundreds came out in support of the Black Lives Matter movement. Protesters chanted, sang gospel, and rode horses to protest the death of George Floyd, who died in custody of Minneapolis police on May 25th.

“I honestly believe that it’s a loving community,” he said. “That’s why I’m invested so deeply in Ponca City. If this is what it takes to change the world, then by God, let’s do it. It’s time. We’re a nation of do-ers. Let’s do it. Let’s fix this. … I’m out here for love. If you can go on the golden rule, we’re all in this together.”

“I thought that being on horseback would make a bigger statement,” Harbeson said.

At protests across the country, speakers have discussed instances of police brutality in police departments large and small. In Ponca City, speakers also addressed the way their children are treated in public schools.

Local motivational speaker Aletha Kearney said the nation’s education system is inherently biased because it is funded with property taxes, revenue from which is often higher in larger communities with populations that are mostly white.

“We see racism at the schools,” she said. “Our precious, sweet babies are going to school, and their dreams are being crushed a little bit every day. They’re called disruptive, lazy, and difficult. Babies are having to hear this. I had a teacher in high school tell me I would never be anything because I talk too much. Guess what? I’m still talking.”