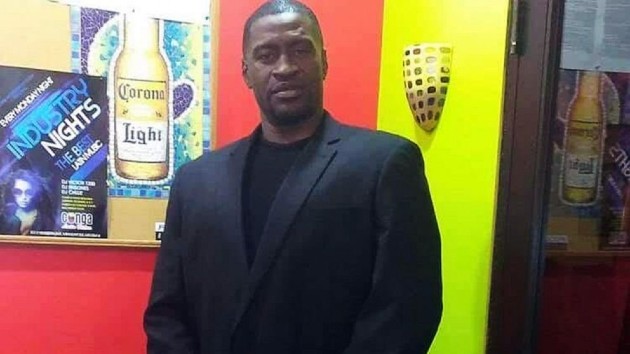 Courtesy Ben Crump LawBy MORGAN WINSOR, ABC News(NEW YORK) — A New Jersey corrections officer has been suspended after a video purportedly showed him mocking the death of George Floyd at a recent protest.The New Jersey Department of Corrections said it was made aware that one of its officers had participated in the “hateful and disappointing” video and that the unnamed individual has since been suspended from their post and banned from all facilities “pending a thorough and expedited investigation.””We thank the community for bringing this issue to our attention,” the department said in a statement Tuesday evening.Another unnamed individual who took part in the reenactment — a FedEx employee — has been fired.”FedEx holds its team members to a high standard of personal conduct, and we do not tolerate the kind of appalling and offensive behavior depicted in this video,” the company said in a statement late Tuesday. “The individual involved is no longer employed by FedEx. We stand with those who support justice and equality.”The incident was captured on video at a Black Lives Matter demonstration in the New Jersey township of Franklinville on Monday. As protesters peacefully march along a road, a white man is seen kneeling on the back of another’s neck, imitating the way in which Floyd was killed.Floyd, an unarmed 46-year-old black man, died in Minneapolis on May 25 after a white police officer was filmed kneeling on his neck as three other officers stood by. The Minneapolis Police Department fired all four officers after video of the incident surfaced.The officer who prosecutors say pinned Floyd down for nearly nine minutes, Derek Chauvin, has since been charged with second-degree murder and second-degree manslaughter. The three other officers each have been charged with second-degree aiding and abetting felony murder as well as second-degree aiding and abetting manslaughter.Floyd’s death has sparked widespread outrage, anti-racist protests and calls for police reform across the United States and around the world. Copyright © 2020, ABC Audio. All rights reserved.