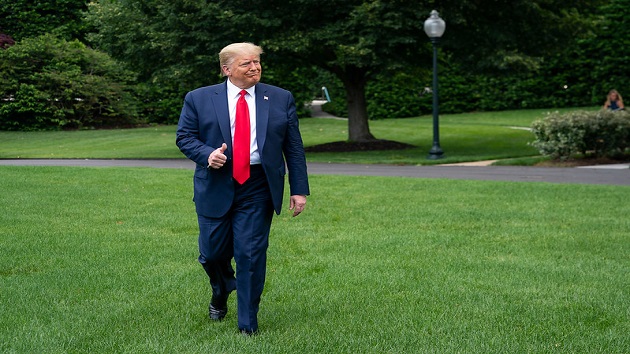 (WASHINGTON) — In a rare reversal, President Donald Trump announced he’s moving his first rally since March from June 19 to June 20 in Tulsa, Oklahoma, so as not to coincide with the Juneteenth holiday.”Many of my African American friends and supporters have reached out to suggest that we consider changing the date out of respect for this Holiday, and in observance of this important occasion and all that it represents,” Trump tweeted Friday night. “I have therefore decided to move our rally to Saturday, June 20th, in order to honor their requests.”Juneteenth is a day commemorating the end of slavery. For many black Americans, it is celebrated as an Independence Day.Prior to Trump’s announcement, former Vice President Joe Biden joined a chorus of people criticizing the president’s rally, though he mistakenly said the wrong location.“What in God’s name is this guy doing? And now did you hear what he just did? He’s having a rally on Juneteenth in…Arizona,” Biden said at teletown hall on Friday afternoon hosted by the American Federation of State, County and Municipal Employees. “And guess what, all the people coming to his rally have to sign a — they have to sign a piece of paper saying, if they get COVID in this, they will not sue the campaign. I mean c’mon man, what the hell is going on?Biden and his campaign have not only been criticizing the date and wavier of Trump’s rally, but also its location. The 99th anniversary of the Tulsa Race Massacre is this month.During the Tulsa Race Massacre, historians believe as many 300 people were killed as white mobs destroyed and burned homes, businesses, churches, schools, hospitals and libraries in the predominantly black Greenwood District of Tulsa, which was an affluent neighborhood called “The Black Wall Street.””How racist is Donald Trump: He’s so racist that he plans on having one of his first campaign rallies on June 19th in Tulsa, OK. If you don’t know — Do some research on #Juneteenth and the racial violence that took place in Oklahoma known as the Tulsa Race Massacre, 1921,” Kamau Marshall, Biden’s Director of Strategic Communications tweeted.Trump briefly defended his rally in a FOX News interview earlier Friday, telling FOX News’ Harris Faulkner that the rally would be a “celebration.””Think about it as a celebration. My rally is a celebration,” he said, going on to brag about his crowd sizes. “In the history of politics, I think I can say there has never been any group or any person that’s had rallies like I do. I go and I just say give me the biggest stadium and we fill it up every time. We have never had a vacant stadium.”Copyright © 2020, ABC Audio. All rights reserved.

As nation surpasses 200,000 deaths, Trump keeps downplaying coronavirus
Wisconsin declares public health emergency due to COVID-19 spread on campuses
‘On the Basis of Sex’ and ‘RBG’ returning to theaters in tribute to Ruth Bader Ginsberg
Trump bashes China at UN amid warnings against a world divided by two superpowers
Chelsea Clinton: ‘Unconscionable’ that Trump ‘lied’ to public about COVID-19
Order to shorten 2020 census didn’t come from Census Bureau, watchdog says