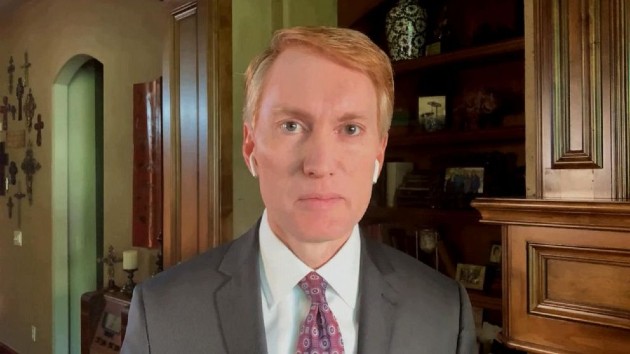 ABC NewsBy JACK ARNHOLZ, ABC News(WASHINGTON) — A key sponsor of an upcoming GOP-backed police reform bill said there should “absolutely” be a ban on the police use of chokeholds, the restraint an officer used when George Floyd was killed in Minneapolis.”That was one of the things that we should have engaged in a long time ago,” Sen. James Lankford, R-Okla., told ABC News Chief Anchor George Stephanopoulos on This Week Sunday. “Many departments around the country have already banned chokeholds,” he said. “There’s been a longstanding principle out there that that is not needed.”While the senator did not disclose whether a chokehold ban would appear in the upcoming legislation, he teased other components of the bill, which he has said Republicans expect to unveil Wednesday.”Our focus is on basic things like transparency,” Lankford said, citing plans to increase access to police disciplinary records, ensure consistent use of body cameras and sending all reports of in-custody deaths to the FBI.A national chokehold ban is a key feature of the sweeping legislation introduced by congressional Democrats last week. The plan, introduced in the House, would also limit the transfers of military weaponry to state and local police departments.The Oklahoma senator’s comments come after President Donald Trump told Fox News on Friday, “I don’t like chokeholds” and said, “generally speaking, it should be ended.” Any piece of legislation will likely require the support of Trump, who says the White House is finalizing an executive order on policing.The upcoming GOP-backed police reform effort comes as another debate has emerged from the nationwide protests: whether Confederate leaders should still be honored with statues or with their names on military installations.Stephanopoulos pushed Lankford on whether he agrees it’s time to rename those military bases.“I do, actually,” Lankford said, adding that he recommends studying the issue before making the changes.That puts Lankford at odds with the president, who wrote on Twitter, “our history as the Greatest Nation in the World will not be tampered with.”Lankford told Stephanopoulos he still plans on attending Trump’s upcoming campaign rally in the senator’s home state on June 20.The campaign had originally scheduled the event for June 19 — the same day as the Juneteenth holiday celebrating the end of slavery — in Tulsa, a city notorious for one of the worst episodes of violence against black Americans in the country’s history.Lankford said he encouraged the president to postpone, telling Trump he thought it would be more “respectful.” And when the president announced the date change, he said it was “out of respect” for the holiday.However, many infectious disease experts, including like Dr. Anthony Fauci, have warned that attending large rallies may increase the exposure risk to coronavirus.When pressed by Stephanopoulos on how the campaign can safely put on a rally with 19,000 to 20,000 people in attendance, Lankford said, “I don’t know how they’re going to handle that, actually.”“That will up to be the city of Tulsa, … the governor of Oklahoma and the Trump team itself to be able to figure out how they want to be able to manage that,” he continued.

House passes bill to ban doping horses on race day
Trump, Biden compete for battleground Ohio ahead of first debate
Statue of Black anti-slavery heroine to be erected in Paris garden
Get your first glimpse of Emma Corrin as Princess Diana on ‘The Crown’
Ilyasah Shabazz says ‘The Godfather of Harlem’ is “great,” but didn’t show the “depth” of her father Malcolm X
Windy, dry, hot weather to continue in parts of California