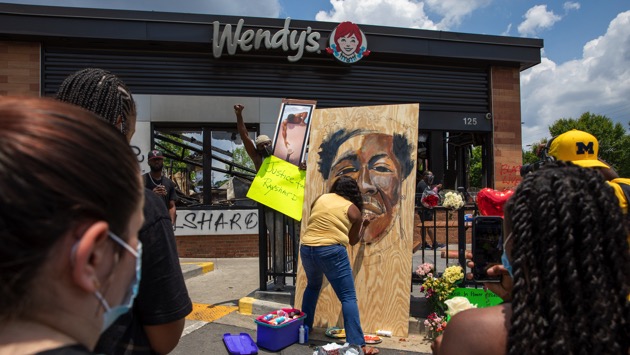 Dustin Chambers/Getty ImagesBy STEPHANIE WASH, EMILY SHAPIRO and SABINA GHEBREMEDHIN, ABC News(ATLANTA) — Days after a black man was shot to death by an Atlanta police officer, his wife says “no justice will ever” heal her broken family.Rayshard Brooks, described by his wife Tomika Miller as a loving husband and father, was fatally shot in a Wendy’s parking lot on Friday, sparking an arson fire and new protests in Atlanta.”I just wish that he could have made it,” Miller told ABC News on Sunday.Brooks’ death has led to protests, an investigation, the resignation of Atlanta Police Chief Erika Shields, the firing of the officer who shot and killed Brooks and the other officer involved being placed on administrative leave.Miller said that she wants to see both officers arrested and the officer who was placed on administrative duty terminated. She said she does not hold the police chief accountable for someone else’s actions but believes Shields made the best decision to step down.”If you can’t help something it’s best to just get out of it,” she said. “Maybe someone else could probably change things or do something better.”Miller said she learned of Brooks’ death when she was awakened by agents from the Georgia Bureau of Investigation on Saturday morning.The state agency and the Fulton County District Attorney’s Office are investigating.”I couldn’t believe it,” she said. “I didn’t know that I was going to wake up to my husband never coming home.”Officers were called to the Wendy’s parking lot on Friday night for reports of a man, later identified as Brooks, asleep in his car. Police administered a Breathalyzer to Brooks, which registered a blood-alcohol level of .108%, slightly above the legal limit of .08%.When officers attempted to place him in handcuffs, Brooks began to struggle and wrestled with both officers on the ground, and then grabbed one of the officer’s stun gun.Surveillance video showed Brooks running through the parking lot with the officers behind him. At one point, Brooks turned and allegedly shot the stun gun at an officer, who drew his weapon and opened fire.Brooks, 27, died from two gunshots to his back, the medical examiner determined.Miller said she’s speculated about Brooks’ final moments and knows he wanted to make it home to his family.”He loved his family. He wanted to be home with us. He had things to do. I can only imagine all he was thinking about,” she said.Miller said she’s now trying to be strong for her four children.”My daughter knows that her father’s not coming home. My son knows that his stepfather’s not coming home, but my little children can feel that their father is not answering to ‘Daddy, Daddy, Daddy,"” she said. “I want to be an example to them that they fight no matter what. No matter how much it hurts, you gotta fight for what’s right.”No charges are currently filed against the officers. Fulton County District Attorney Paul Howard Jr. told ABC News on Sunday that his office hopes to announce a decision in the case this week.Brooks’ death sparked an arson fire at the Wendy’s during a Saturday night protest. Miller said she understands the protesters’ “frustration and anger,” but that destroying property “only makes more aggression and more conflict.””I just want to fight it with peace and fight with dignity, because that Wendy’s was somebody’s business and they have a family to feed and take care of just as well as me,” she said.Miller, now a single, black mother, said she feels “like I’m just a statistic.””Now I’m by myself taking care of four children,” she said. “This was not a choice — they forced this on me by taking my husband away, by taking my family.””They just broke my family. No justice will ever get that back,” she said. “This is another black family being broken.”Copyright © 2020, ABC Audio. All rights reserved.