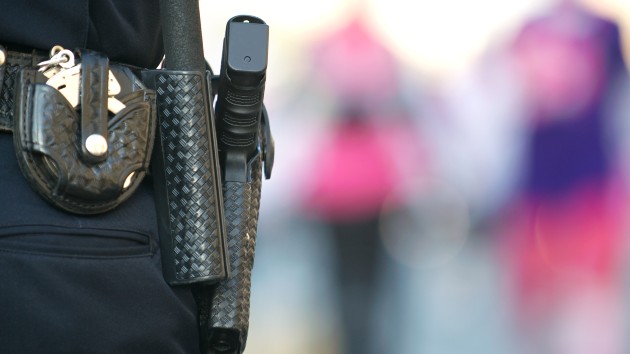 dlewis33/iStockBy JON HAWORTH, ABC News(NEW YORK) — A police officer in New York has been suspended and an investigation has been launched into his behavior after a video of him rapping transphobic lyrics and encouraging violence was posted and made public on social media. In the video, a man who identifies himself as Officer Robert Sisco, and can be seen wearing a police uniform with a name tag that reads “R. Sisco,” films himself rapping for about a minute on a series of different controversial topics. The officer who works for the New Paltz Police Department in New York proceeds to rap transphobic messages, encourages violence against former Secretary of State Hillary Clinton, and even manages to get in a line about how the coronavirus was sent to the U.S. by China.”Spit facts over feelings because your feelings are irrelevant, there’s only two genders and Trump’s still your president,” the man proclaims before proceeding to rap about the anatomy of men and women. In another verse the officer then says “Hillary is Killary we all know the reason, where those emails at? We should hang her for treason.”A verse toward the end of the video includes “just because I’m a cop it doesn’t mean that I’m bad, but I’d rather use my words than resorting to violence.” The video caused an uproar within the community, according to the Town Board of New Paltz, and was the cause of many complaints, which sparked the town to issue a public statement on the matter. “The following message has been unanimously written and approved by all members of the Town Board,” the statement began. “The Town Board, as Police Commission, has received many complaints and has seen the officer’s video. We are so sorry that the trust of many in our community has been broken and that their safety feels threatened. No one in our town should have to feel that way about our police. The New Paltz Police have initiated an internal investigation and will be working closely with the Police Commission to explore and direct responsive action in this matter, in the meantime we have placed the officer on administrative leave. We are all committed to repairing trust with our New Paltz transgender and LGBTQ+ community members.”The controversy comes not only in the middle of Pride Month which is being celebrated across the country but also at a time when police are receiving increased scrutiny about their behavior following the death of George Floyd on May 25 at the hands of the Minneapolis Police Department. New Paltz Police Chief Rob Lucchesi said there is no set timeframe for how long the investigation will take into the officer’s conduct, according to the Poughkeepsie Journal. Copyright © 2020, ABC Audio. All rights reserved.