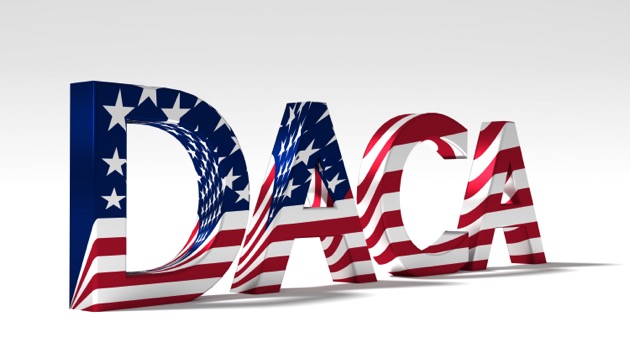 BeeBright/iStockBy LIBBY CATHEY and TRISH TURNER, ABC News(WASHINGTON) — In President Donald Trump’s first reaction to the Supreme Court’s ruling on DACA Thursday, he tweeted an attack on the court’s “horrible & politically charged decisions” calling them “shotgun blasts into the face of people that are proud to call themselves Republicans or Conservatives.”

These horrible & politically charged decisions coming out of the Supreme Court are shotgun blasts into the face of people that are proud to call themselves Republicans or Conservatives. We need more Justices or we will lose our 2nd. Amendment & everything else. Vote Trump 2020!

The Supreme Court’s decision Thursday handed Trump a major political defeat on his key campaign issue of immigration, blocking his 2017 decision to end the Deferred Action for Childhood Arrivals program, or DACA, created under President Barack Obama.”We need more Justices or we will lose our 2nd. Amendment & everything else. Vote Trump 2020!” the president tweeted.Trump went on to suggest the court, now with a conservative majority after his two appointments, was his new political enemy.”Do you get the impression that the Supreme Court doesn’t like me?” he tweeted.Moments later, President Obama also weighed in, harkening back to eight years this week when he first announced the program. He also added a call to action, saying to elect for his former Vice President Joe Biden and Democrats to Congress this fall to ensure protections for DREAMers continues.”Eight years ago this week, we protected young people who were raised as part of our American family from deportation. Today, I’m happy for them, their families, and all of us,” Obama said in a tweet. “We may look different and come from everywhere, but what makes us American are our shared ideals.”

…and now to stand up for those ideals, we have to move forward and elect @JoeBiden and a Democratic Congress that does its job, protects DREAMers, and finally creates a system that’s truly worthy of this nation of immigrants once and for all.

Echoing that sentiment, Biden also lauded the Supreme Court’s ruling, vowing to work to make it permanent if elected.“The Supreme Court’s ruling today is a victory made possible by the courage and resilience of hundreds of thousands of DACA recipients who bravely stood up and refused to be ignored. As President, I will immediately work to make it permanent by sending a bill to Congress on day one of my Administration,” Biden said in a statement.On Capitol Hill, members of Congress were quick to respond to the landmark decision.Reacting almost in real time, Senate Minority Leader Chuck Schumer choked up on the Senate floor and wiped his eyes with tissues, saying the news out of the Supreme Court this week is “surprising but welcome.””I cried tears of joy a few minutes ago when I heard the decision of the Supreme Court on DACA,” Schumer said. “This is a wonderful, wonderful day for the DACA kids, for their families and for the American dream.”

“This is a wonderful, wonderful day,” Senate Minority Leader Chuck Schumer says in emotional statement on the Senate floor following the Supreme Court DACA decision.”It gives you some faith that the laws, rules and mores of this country can be upheld.” https://t.co/ZwJVPphHWA pic.twitter.com/6QdFu40zg1

“In these very difficult times, the Supreme Court provided a bright ray of sunshine this week,” he added.House Speaker Nancy Pelosi also praised the decision in a news conference Thursday morning, saying that it “supports our values as a country.””We were just in such dread of what could possibly happen in the court,” she said, but added, “this way is the American way and we’re very proud of it.”Sen. Dick Durbin, D-Ill., the original author of the DREAM Act, also celebrated the decision on the Senate floor but also warned it could be a fleeting moment.”The Trump administration can decide that they are going to reinitiate this — try to rescind DACA — and do it right this time,” Durbin said, referring to Roberts’ focus on the procedure Trump took rather than the policy. “That would be a tragedy.”He said he’s begging Trump to wait “through the election and let the next president, whoever it may be, make a decision.”In describing who these DACA recipients are, of roughly 700,000, Durbin said 200,000 are essential workers and 40,000 of them are health care workers helping fight the novel coronavirus.”If you are a patient today fighting COVID-19 and your doctor or nurse walks into the room with a smile, it’s because the Supreme Court said today…we need you,” Durbin said.Meanwhile on Twitter, Sen. Marsha Blackburn, R-Tenn., a Trump ally, was among the first congressional Republicans to publicly respond calling the decision “very disappointing.”Democrats overwhelmingly applauded the decision.Sen. Chris Murphy, D-Conn., told reporters on Capitol Hill it’s “a very good day for a lot of kids and a lot of families.”Former presidential candidate Sen. Elizabeth Warren, D-Mass., was among the first to respond on Twitter, using the hashtag #HereToStay.”The Supreme Court made the right choice to overturn Donald Trump’s cruel termination of DACA –but this fight is far from over,” she said, adding, “I’ll keep fighting to ensure Dreamers and their families have a path to citizenship in the country they call home.”Rep. Eric Swalwell, D-Calif., another former presidential candidate, also tweeted “our communities are stronger and our future is brighter thanks to this historic SCOTUS decision.”This is the second time this week Justice Roberts has sided with the liberal members of court. On Monday, the court ruled employment discrimination on the basis of sexual orientation or gender identity is prohibited under federal civil rights law.Copyright © 2020, ABC Audio. All rights reserved.