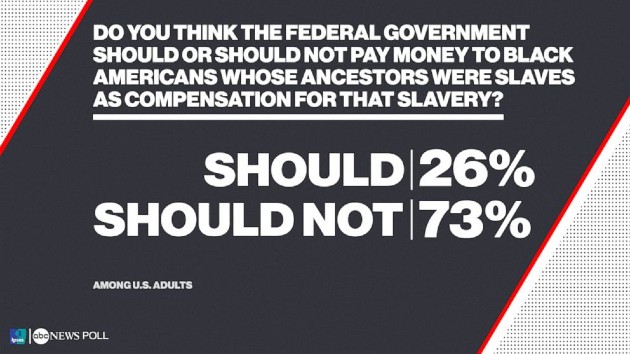 ABC News/Ipsos PollBy KENDALL KARSON, ABC News(WASHINGTON) — As the country grapples with a widespread reckoning over the prevalence of racism, majorities of Americans are resistant to renaming U.S. military bases that carry the names of Confederate leaders, and are voicing particular opposition to providing descendants of slaves with reparations, according to a new ABC News/Ipsos poll released Friday.While 56% are opposed to changing U.S. military bases named for Confederate leaders, which stand as a reminder of the nation’s complicated history with race, 42% of Americans support the move. Nearly three-fourths of Americans believe that the federal government should not provide payments to black Americans whose ancestors were slaves to compensate for the toll of slavery. Only 26% of Americans are in favor of reparations.Beyond these topline divisions over handling the scars of America’s past, there are stark racial divides. Black Americans are far more likely to support renaming Confederate bases and reparations than both white Americans and Hispanics.In the new poll, which was conducted by Ipsos in partnership with ABC News using Ipsos’ Knowledge Panel, two-thirds of Black Americans favor renaming Confederate bases, which is more than double the support among white Americans (32%), and is 13 points higher than the approval among Hispanics (54%).Black Americans (72%) are also more than five times as likely to back reparations than whites (14%) and over twice as likely than Hispanics (34%).Although we have seen large changes in opinion on a wide variety of issues revolving around race in America, there has been only a slight change in attitudes about reparations over the last 20 years. An ABC News/Washington Post poll from June 1997 found that only 19% of Americans backed providing black Americans whose ancestors were slaves with payments, while 77% opposed it.In 1997, 65% of blacks and a meager 10% of whites supported reparations, a split that is about the same as this week’s poll.The survey also finds sharp partisan divisions over both giving military bases new names and paying reparations to descendants of slaves: 71% of Democrats support changing the names of bases compared to only 13% of Republicans and 40% of independents.Democrats are more divided in their support for reparations than they are in their approval of renaming bases, with only 54% backing the federal government paying black Americans compensation for slavery, while 45% oppose. Meanwhile, Republicans (94%) and independents (82%) are overwhelming against such a decision.This week, another poll, asking a similar question on military bases, was released by Quinnipiac, showed a slightly different result.In the Quinnipiac poll, voters were split, 47%-47%, over renaming Confederate bases. The Quinnipiac poll had slightly more Democrats in its poll. The difference in attitudes on changing the names of bases in the two polls is a function of differences in the attitudes of independents. Independents were more likely to support renaming Confederate bases in the Quinnipiac poll and slightly more likely to oppose it in the ABC News/Ipsos poll. Partisans had similar attitudes in the two polls.Younger Americans, too, are more likely to back renaming military bases than their older counterparts, with 55% of 18-29-year-olds supporting the move, compared to 32% among those over the age of 65.Americans over the age of 65 are overwhelmingly against such a change, with 65% opposing renaming military sites.The poll comes as the country marks the anniversary of Juneteenth, which commemorates when the last people who were still enslaved were told they were freed, more than two years after slavery ended, and amid ongoing unrest across the country over racial injustice, further renewed by the killing of Rayshard Brooks at the hands of a white police officer in Atlanta.It also comes the same week that a coalition of some 50 progressive groups, including some associated with Sen. Bernie Sanders, I-Vt., pushed presumptive Democratic nominee Joe Biden to adopt a more progressive approach to reforming policing and criminal justice.”You cannot win the election without the enthusiastic support of Black voters, and how you act in this moment of crisis will play a big role in determining how Black voters – and all voters concerned with racial justice – respond to your candidacy,” the letter to Biden from the organizations reads.The letter also calls on Biden to support policies outlined by The Movement for Black Lives, which includes supporting reparations for black Americans, something Biden has hesitated to embrace. He, instead, says he backs studying the feasibility of reparations.Last week, President Donald Trump said his administration “will not even consider” renaming military bases originally named after Confederate leaders, a day after the Army issued a statement saying top military leaders were “open” to the discussion.The only issue in the poll that finds near-universal approval across racial and political lines is banning the use of chokeholds by police officers, with majorities of black Americans (71%), white Americans (63%), Hispanics (56%), Democrats (71%), Republicans (51%), and independents (63%) all backing such a step. And overall, 63% of Americans support banning chokeholds.This ABC News/Ipsos poll was conducted by Ipsos Public Affairs‘ KnowledgePanel® June 17-18, 2020, in English and Spanish, among a random national sample of 727 adults, with oversamples of black and Hispanic respondents. Results have a margin of sampling error of 4.1 points, including the design effect. See the poll’s topline results and details on the methodology here.Copyright © 2020, ABC Audio. All rights reserved.

Democrats have few tools to slow Senate vote on Supreme Court nominee before Election Day
Trump, White House blend denials, justifications in reaction to New York Times story on his taxes
Chadwick Boseman donated part of his salary to co-star Sienna Miller on ’21 Bridges’
Here’s why Evan Rachel Wood is no longer on Twitter
Michigan voters weigh in on election as newfound battleground state
Frankie Muniz and wife Paige Price announce they have a “little miracle” on the way